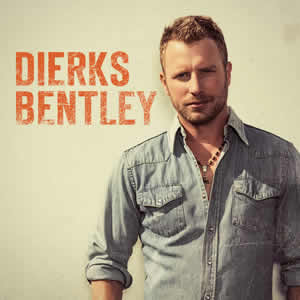 April 2, 2015 - Dierks Bentley, who has rocketed to the top tier of country music’s hitmakers, will get EAA AirVenture Oshkosh 2015 week off to a great start when he headlines the fly-in’s popular opening night concert on Monday, July 20. The concert, presented by Ford Motor Company with additional support from Cirrus Aircraft, is free to all EAA AirVenture attendees that day and will be held on Boeing Plaza following the afternoon air show.

“Dierks Bentley is a superb choice for our opening night concert not only because he is one of music’s brightest stars, but also because he is an avid pilot who has been to Oshkosh before enjoying the sights and sounds as an aviation enthusiast,” said Rick Larsen, EAA’s vice president of communities and member programs. “Dierks brings the energy and enthusiasm that complements the full week of aviation excitement that will be featured at EAA AirVenture.”

Bentley, an ACM top male performer nominee, is seven albums into one of country music’s most respected and most unpredictable careers. His latest evolution comes in the form of his critically acclaimed and No. 1 selling album RISER, which has already spawned two consecutive No. 1 hits with I Hold On and Drunk On A Plane. His latest single Say You Do is now climbing the Top 10 charts.

“Ford is proud to be the exclusive automotive partner with EAA for 15 years and pleased to enhance the experience for everyone attending EAA AirVenture Oshkosh,” said Edsel B. Ford II, member of the Ford Motor Company Board of Directors. “Since 2006 we’ve helped bring some of the biggest names in music history to the stage at Oshkosh to kick off aviation’s annual reunion, and we’re eager to have Dierks Bentley join that roster for the opening night concert.”

The opening night concert at EAA AirVenture is just one of a variety of family attractions and entertainment that are part of the week-long event. These added activities, ranging from night air shows to entertainment, are nearly all included with EAA AirVenture admission. They are in addition to the hundreds of aviation forums and workshops, special presentations, and aviation exhibits available at Oshkosh.

For more information, including advance purchase for admission, camping, and parking, visit the AirVenture section of our website.