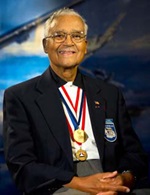 EAA AirVenture’s Warbirds in Review program will feature the Red Tail Squadron’s P-51C Mustang Tuskegee Airmen Saturday, July 25, at 1 p.m. on Warbird Alley. McGee and squadron pilot Doug Rozendaal will provide an up-close look at the vintage WWII aircraft, which is outfitted much like the ones McGee flew in WWII.

“We look for every opportunity to foster a greater understanding of the history and legacy of the Tuskegee Airmen,” said CAF Red Tail Squadron Leader and P-51C Mustang pilot Brad Lang. “Their story, and that of the CAF Red Tail Squadron, is a means to inspire people of all ages to achieve their potential. Col. McGee is truly an American hero, and it is our honor and privilege to appear with him at Oshkosh.”

McGee and the CAF Red Tail Squadron’s participation in the event are presented by the EAA Warbirds of America, whose goal is to promote and encourage the preservation and safe operation of ex-military aircraft. Learn more at www.warbirds-eaa.org.