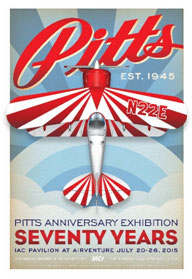 June 25, 2015 - A number of historic and noteworthy Pitts airplanes are expected in Oshkosh this year to help the International Aerobatic Club celebrate the 70th anniversary of the Pitts S1 at EAA AirVenture Oshkosh 2015.

Pitts S-1C N125RA - Owner/pilot: Robert Armstrong, Bishop, Georgia - This S-1C has competed in all IAC categories of competition and first appeared on the national scene in 1981 in Armstrong’s hands. He later flew the airplane in Unlimited competition, qualified for the United States team, and this aircraft competed at the World Aerobatic Championships in Le Havre, France in 1992.

Pitts NX86401 – Owner: Peter Gauthier, Sonoma, California - This Pitts, now under construction, is a replica of the second Pitts that Curtis built and was initially flown in air shows by Phil Quigley. In the late 1940s, it was purchased by Betty Skelton who flew it in its original livery for a short time but later painted it in the scheme it is known for today and re-registered the aircraft as N22E. The original N22E, Little Stinker, now resides at the National Air and Space Museum in Washington, D.C.

Pitts S-2A N80003 - Owner: Charlie Sikes, Auburn, Alabama - This is the same S-2A that famous air show pilot Jim Holland performed in during the 1970s. It is also the airplane in which Holland flew actor William Shatner on a sports television program.

Pitts S-1S N169CM – Owner: Gregory Baker, Woodland Park, Colorado - This is the aircraft that Debby Rihn-Harvey flew in the World Aerobatic Championships in the 1980s.

Pitts S-1 N8M – Owner: Ted Teach, Dayton, Ohio - This Pitts is a replica of the 1950 national aerobatic contest winner - Caro Bailey’s airplane.  It was the second S-1 built and sold by Curtis Pitts.

Pitts S-2AM N8028 – Owner: Dan McGarry, Hinsdale, Illinois - One of the original IAC members (IAC 30) since the 1970s, it started life as a stock S-2A but has been extensively modified over the years for more performance. McGarry flew it in the Advanced category for decades.

Pitts S-1-11B N111PU – Owner: Sean Worthington, Campbell, California - One of only about 10 Pitts S-1-11Bs in existence and one of the last aircraft Curtis designed, this model of the Pitts was flown at the World Aerobatic Championships in 1996 by Robert Armstrong. N111PU was built by Steve Wolf and features custom wing-root fairings to eliminate tail buffet and with ram air induction to increase power to the cold sump Lycoming IO-540. It is the only S-1-11B registered for EAA AirVenture this year.