Pelton reports on another successful convention 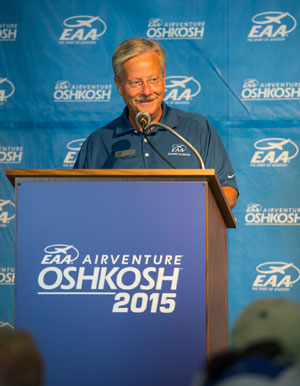 July 26, 2015 - Whether you’re talking weather, variety of aircraft, volunteer support, air shows, or the plethora of “Only in Oshkosh” examples, a weary but happy EAA Chairman Jack Pelton said EAA AirVenture Oshkosh 2015 was another great week.

“I don’t know what else to say – it has been an absolutely incredible week, nearly perfect weather, the assortment of aircraft has been tremendous, the volunteer support has been great,” he said at his closing press conference Sunday at EAA Press Headquarters.

But what’s especially worth noting, he said, is the fact that the organization appears to have come back full circle to the EAA culture.

“I think what’s most important to all of us at EAA is that it really felt like we are getting back to our culture, and the vibe overall on the grounds and everywhere has been back to the community-family that we’ve been striving to get to over the last three years,” he said.

Oh, and the numbers: they were pretty good, too. Pelton said that while final tallies won’t be available until sometime next week, he said 2015 will wind up being the highest-attended convention since 2005, with total attendance around 550,000.

As of Sunday, we had already established an all-time record of aircraft movements – 16,278 for the week – with some single-day arrivals alone exceeding 3,000.

“Our air traffic controllers were boasting that it was double the number of what occurs at O’Hare at any given day, so for a controller that’s a big milestone,” Pelton said.

The number of volunteers, without whom none of this could happen, again exceeded 5,000. There were just over 800 exhibitors, 970 media representatives from six continents, and camping numbers show a steady 4.3 percent increase over prior years.

EAA was focused this year on ensuring a diversity of attractions to help bring people to the show. “We worked really hard all year long on ensuring that we had something for everybody with an overarching theme that really says ‘Only in Oshkosh,’” Pelton said. “And I think that panned out very well.”

F-35, B-52, F-100 Super Sabre, Goodyear’s Wingfoot One, the Airbus A350, and the replica Junkers F13 all made first-time appearances. The Apollo 13 reunion, Burt Rutan’s return, father of ultralights John Moody’s appearance - all these and more were threads in the “Only in Oshkosh” cloth.

Pelton also thanked the controllers as well as Wittman Regional Airport officials, who need to ramp up their operations for this one week out of the year.

Pelton reiterated EAA’s effort to urge senate support of the Pilots Bill of Rights 2, which at this writing remained three short of the required 60 bill co-sponsors to go to the floor for a vote.Looking ahead to 2016, which takes place July 25-31, Pelton hinted at several attractions already being discussed. “We will stick with the theme and model of this year and just inundate you with sensory overload every day in some form or fashion,” he said. For starters…

“We can say we clearly had a success, and we will continue to build on it,” Pelton said. “We will start the brainstorming process tomorrow.”