EAA AirVenture 2015 to Celebrate 75 Years of the Ercoupe 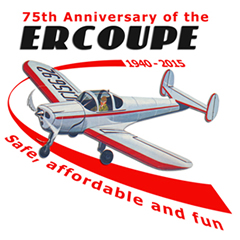 January 15, 2015 - A popular and innovative post-World War II airplane design will be celebrated at EAA AirVenture Oshkosh 2015 as we observe the 75th anniversary of the innovative ERCO Ercoupe. Along with the original Ercoupe 415 that first became available in 1940, other iterations of the airframe are also welcome to be at Oshkosh this year, including the Aircoupe, Alon, and Mooney M-10.

Syd Cohen (EAA 98446/Vintage 12480), owner of the award-winning 1946 Ercoupe 415-D Scampy, is co-coordinator for the 2015 National Ercoupe Convention that takes place the weekend before Oshkosh, July 15-18, at the Sheboygan County Airport (SBM) in Sheboygan Falls, Wisconsin. They’re aiming to get at least 75 airplanes to participate, though Cohen said, “100 would be better.”

A full slate of events and activities will be scheduled for both the Ercoupe convention and during AirVenture Oshkosh. Activities at Sheboygan Falls will include an open house/aircraft display for the public, Young Eagles flights, a maintenance forum, and a Saturday evening awards banquet.

On Sunday morning, July 19, planes will fly in trail to Oshkosh, with 500 feet-1,000 feet spacing between planes. Special parking for Ercoupes will be provided in the Oshkosh Vintage area. The Ercoupe Owners Club will hold a Tuesday evening banquet at the Oshkosh Elks Club Lodge where guest speaker will be Jessica Cox, a woman born without arms learned to fly in an Ercoupe and continues to fly today. More will be announced as they are confirmed.

Cohen discovered there are more than 2,000 individuals who own Ercoupes in the United States, according to the FAA aircraft registry, and with 500 current EOC members he’s aiming to create more club members for the 35-year-old type club.

Ercoupe History (from David Abrams/Ercoupe.com): The Ercoupe was a different kind of airplane where it was first introduced in the late 1930s by Engineering Research Corporation, or ERCO. The Ercoupe was the first production tricycle aircraft and was designed by Fred Weick, who also desined the Piper Cherokee. (The Sheboygan Falls Convention this year is dedicated “In honor of Fred and Dorothy Weick.”)

The twin-tailed Ercoupe originally had coordinated controls, meaning the rudder was connected to the yoke and yaw correction was automatic - it had no rudder pedals. The steerable nose wheel was connected directly to the yoke, meaning taxiing was akin to driving a car.

That characteristic, and the limited up elevator travel, made the Coupe “characteristically incapable of spinning” and it was marketed as “the World’s Safest Airplane.” An entirely new category of pilot license was created for the thousands of new pilots who had never seen a rudder pedal, although rudder kits were available to convert the plane from 2-control (coordinated) to 3-control (conventional).

The plane was built by a series of manufacturers including ERCO, Sander, Forney, Alon, and Mooney – which built the last 59 with a “Mooney tail” instead of  the signature twin tail.

Ercoupe climb and cruise performance very similar to the performance of a Cessna 150 - but it drops like a rock when the power goes off. The best thing about a 'Coupe is you can fly it with the sliding windows down. My windows go down in April and stay down until Halloween.

The 415-C and -CD models have a gross weight of 1260 lbs and therefore may be flown by pilots with only a sport pilot certificate. It is the only standard category aircraft to meet these requirements that is not a taildragger. As such, the price on these models has skyrocketed since 2004 when the sport pilot regulations were adopted.