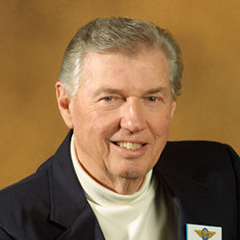 June 7, 2018 - The Vintage Aircraft Association (VAA) will honor the memory of one of its longtime leaders on Monday, July 23, when the VAA dedicates Charles W. Harris Memorial Park, or “Charlie’s Park,” during the opening day of EAA AirVenture Oshkosh 2018. The dedication program begins at 11:45 a.m. and will take place just west of the Vintage Hangar, with all AirVenture visitors invited to attend.

The wooded area will honor the late Harris, who died on December 9, 2017, at age 90. He served the VAA in various capacities including national director, treasurer, chairman of executive committee, chairman of the Hall of Fame selection committee, and director emeritus from 1988 to the time of his death.

In honor of Harris’ love of World War II aviation and naval history, the Ladies for Liberty will present their 1940s musical tribute to the Andrews Sisters at the dedication event. Also speaking during the program will be Betsey Kersey, Harris’ business partner for 53 years. Kersey will be introduced by VAA president Susan Dusenbury and EAA CEO & Chairman of the Board Jack J. Pelton.

Harris had a long, distinguished business career in Oklahoma, but also had a lifelong passion for vintage aircraft. In 2001, he founded the Friends of the Red Barn (FORB), the major VAA annual fundraising campaign to preserve and expand the “Vintage experience” during the annual AirVenture fly-in convention.

He was instrumental in securing two major donations in 2017 to construct the VAA judges’ building and restore and expand the iconic VAA Red Barn headquarters. The July 23 dedication will be immediately followed by an ice cream social on the front porch of the VAA Red Barn, where the Ladies for Liberty will also perform.