Dick Rutan Tested Himself in Combat 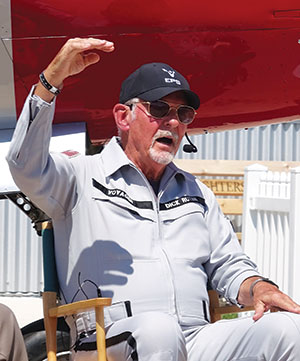 July 29, 2017 - Veteran pilot Dick Rutan was the honored guest at a Warbirds in Review session Friday that recounted his Air Force experiences in the Northrop F-89 Scorpion all-weather interceptor. The F-89 Scorpion on display outside the EAA Aviation Museum was supposed to be towed down to the Warbirds in Review ramp, but when that was not possible, a similar vintage T-33 stood in as Rutan talked about Scorpion tactics.

The F-89 is remembered warmly by some EAA members because it was flown by the organization’s founder, Paul Poberezny.

Dick was a radar intercept officer (RIO) in F-89s for the 57th Fighter Interceptor Squadron at Keflavik, Iceland. He recalled the Scorpion’s attack profile, in which the RIO would set a course to put the F-89 on a 90-degree beam attack to its target aircraft. Adjusting the course to avoid a collision, the Scorpion would release all or some of the 104 unguided missiles it carried in the front of its large wingtip tanks, he said.

Cold War alert duty at Keflavik included occasional scrambles to identify jetliners that had strayed off course. Dick said he flew the last active-duty Scorpion alert at Keflavik when he saw the inbound F-102s that would replace the Scorpions.

Dick’s warbird session quickly morphed into a discussion about his later Air Force service in F-100s over Vietnam. Following pilot training, Dick was pleased to be posted to F-100 Super Sabres. He had wanted to be an Air Force pilot since he was a child. Dick said he marveled at the courage of World War II aviators who returned to the skies, mission after mission, in the face of daunting odds of survival. “I wondered if I could do that,” he said. Did he have the mettle to match WWII crews? Vietnam was in conflict, and “little Dicky Rutan was going to find out.”

His first tour in an F-100 consisted of bombing targets in the jungles. He learned of a new venture that would send two-seat F-100s over North Vietnam as high-speed forward air controllers (FACs) under the call sign “Misty.” It was his job to mark targets on the busy Ho Chi Minh trail. “The neat part of this was flying low and fast,” Dick said. “We got shot at a lot.” Sometimes, to show a new Misty volunteer what the neighborhood was like, Dick would fly to a rock prominence to see “the kid on the karst.” It was there that an enemy gunner with a .50-caliber weapon opened fire but missed the fast-flying Super Sabre. The highest calling for a Misty FAC was participating in the rescue of a downed American airman.

On one sortie, Dick found himself below the normal 3,000-foot floor for Misty operations as his two-seater strafed a truck. A bang and fire indicated the F-100 was hit. As the aircraft lost fuel, the circular fuel gauge told a sickening tale as the two airmen dashed for the coast to bail out near rescuers. The crew debated lighting the afterburner to get more speed as fuel streamed overboard, but they wondered if it would explode, Dick said. Finally, they hunkered down reflexively in their seats and hit the burner. It worked, accelerating the crippled F-100 until Dick saw the fuel gauge needle nudge about one width below zero. “And it flamed out,” he said. On the Jolly Green rescue flight home that day, “I went to sleep because I knew my tour was over,” Dick said.

Dick Rutan’s tour adventures were only beginning. He will forever be remembered as a pilot of the Rutan Voyager, the nonstop, globe-girdling composite aircraft designed by his brother, Burt Rutan, and built on a shoestring budget in Mojave, California. The notion of tanking enough gas for a nonstop, round-the-world flight was pretty outrageous. During the Warbirds in Review session, Dick once again pondered how dangerous the mission was. They even made a “death tape” to give to the rest of the team in case they didn’t make it.

Flying the flexible-winged Voyager required a good understanding of its construction and limitations, as there was a very real chance of overstressing it, Dick explained. Just before taking off from Edwards Air Force Base on December 14, 1986, he told himself, “Dick, you’re probably going to be dead in five minutes.” However, the flight, while fraught with perils such as the potential loss of winglets, was safely completed. Dick Rutan and Jeana Yeager can claim what many considered to be the last aviation milestone flight. Dick said he was inspired during difficult times on the global flight by something his mother had said: “If you can dream it, you can do it.”