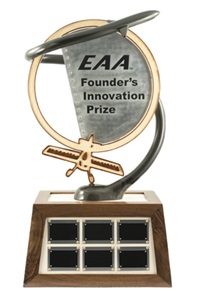 July 25, 2016 ‑ According to the NTSB, over a period of eight years 47 percent of fatal fixed-wing general aviation accidents in the U.S. involved pilots losing control of their aircraft in flight. By any measure that is a big problem, and anything done to reduce the incidence of such accidents will have a dramatic effect on all aspects of GA safety, including for the experimental amateur-built aircraft many EAA members create and fly.

On Tuesday, July 26th, at Theater in the Woods five finalists for the EAA Founder’s Innovation Prize will defend their ideas on how to reduce loss-of-control accidents in front of a panel of judges. The winner will take home a $25,000 grand prize, presented by Airbus Group, in the hope that the idea, be it technological or otherwise, can be developed into a practical solution.

“The great thing about a contest like this is the wide variety of innovative, unexpected ideas that you can only get by engaging the broader community,” said chief judge and retired astronaut Charlie Precourt. “The contest could really start to move the needle on beating down loss of control, and it is certain to raise awareness in our community of the significance of the problem.”

“Our advocacy work is directly tied to our safety work,” Elliott said. “What we are doing is reducing barriers in order to improve a pilot’s ability to fly more affordably and more safely.”

“The Founder’s Innovation Prize is the EAA community stepping up to the plate to actually do something to reduce the loss-of-control fatal accident rate,” Elliott added. “It might be a training solution, it might be a new development of a gadget or a technology innovation…our goal is a 25 percent reduction in [LOC induced fatal accidents] in the next five years, and a 50 percent reduction in the next 10 years.”

Elliott said a past example of such innovation was the addition of terrain features in aviation GPS units. Controlled flight into terrain (CFIT) was a common problem just a few years ago, and once terrain awareness became available, the associated accident rate fell dramatically.

Precourt pointed out another example in that both military and civilian aviation in the late ’70s and early ’80s had a significant issue with accidents that ultimately were solved by the emergence of crew resource management training. While the application of technology may be the best solution for the LOC challenge, the CRM solution is an example of approaching the problem from a human factors angle.

They will defend their proposals in front of the judging panel tonight at 8:00 p.m. The panel, a veritable who’s who of all things aviation, consists of Precourt, who chairs EAA’s Safety Committee; Dick VanGrunsven, designer of the Van’s RV series of aircraft; aviation safety speaker and author Rod Machado; Dave Morss, one of the country’s pre-eminent civilian test pilots and air racers; and Michael Goulian, national aerobatic champion and Red Bull Air Race competitor.

The finalists will attempt to convince the judges that their ideas have the effectiveness, ease of installation or implementation, low cost, and wide applicability necessary to help solve fatal loss-of-control accidents.

The contest was announced at EAA AirVenture 2015.

Using innovation to address the LOC accident rate issue has broader implications beyond making personal flying safer. According to Doug Macnair, EAA vice president of government relations, the community could face unwanted regulation if LOC accidents are not addressed.

“If EAA takes the lead in mobilizing the ingenuity and inventiveness of this force out here, our members, to solve this problem, it staves off future regulation that could be restrictive,” Macnair said. “By EAA taking the lead on this key issue we are actually getting ahead of the [potential] advocacy challenge.”