Live Weather and Traffic for Less Than $120 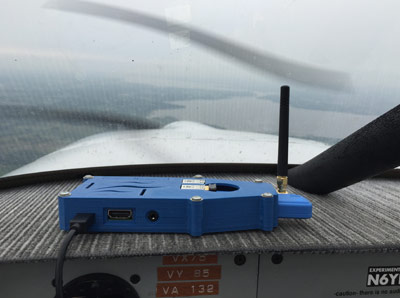 For decades, the homebuilt movement has allowed pilots affordable access to the latest in aircraft technology. One area where it hasn’t always been so prominent is in the field of cockpit electronics. Now, however, several talented programmers have begun turning inexpensive, off-the-shelf parts into very useful gadgets that take the place of commercial devices costing many times more.

One of these programmers is Christopher Young, EAA 1184340, who turned an inexpensive miniaturized Linux computer, a digital radio tuner, and a Wi-Fi adapter into an ADS-B receiver that interfaces with most tablet apps on the market today to bring live weather and traffic to the cockpit. We built and tested the unit for a total cost of under $120 (Avgas not included). The software is free and open-source, meaning it is open to community development. He calls his software “Stratux.”

Young's instructions are found here: Let’s take a look at how it goes together:

Assembly and loading the software is very simple. We were able to get our unit working with no coding on our part or really any technical work at all. However, you will need to do a little shopping first.

The “brain” of the unit is the Raspberry Pi 2, a small, simple computer about the size of a deck of cards that uses the operating system Linux. It was originally designed as an inexpensive computer to teach aspiring programmers how to code (you could hook up a keyboard, mouse, monitor, network cable, and speakers to it and use it as a fully functional desktop computer), and has since been used in robotics and other applications requiring a small computer that can be easily adapted to suit different roles. You can buy just the Raspberry Pi, but several companies sell an aftermarket kit that includes the peripherals you will need for this project. This is what we did, as per Young's instructions. The “Vilros” starter kit costs about $70 on Amazon.com. 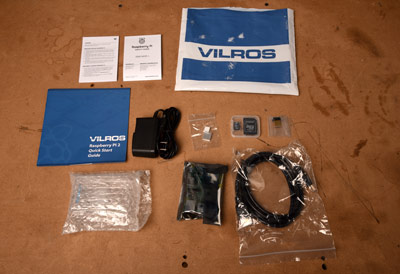 With the Pi and starter kit, the only other peripheral that is required is a software defined radio (SDR) tuner. Young’s software has been tested to work on a device from NooElec called the NESDR Mini 2. It is currently available on Amazon for less than $25 and also includes the antenna you will need. 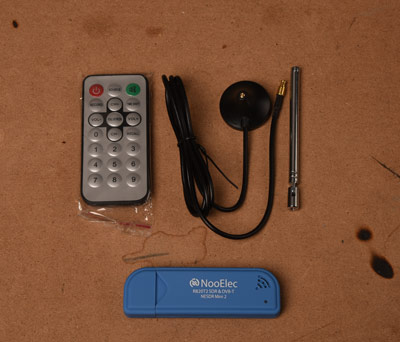 The Raspberry Pi does not contain an internal battery, but is powered via a micro USB cable, the same type of cable used to charge most Android cellphones. You can either run the unit directly off your aircraft’s power system using a car charger (if you have a cigarette lighter-style 12V outlet) or by using a USB external battery, which you can buy for a little over $10.

Assembly really couldn’t be easier. Our starter kit came with self-adhesive heat sinks to prevent certain chips from overheating on the Raspberry Pi. These are on top of the unit and it is easy to pick out which to attach. 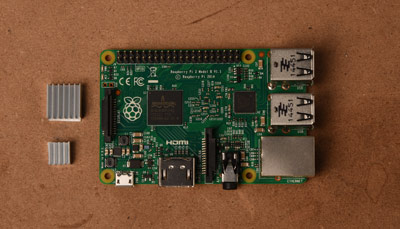 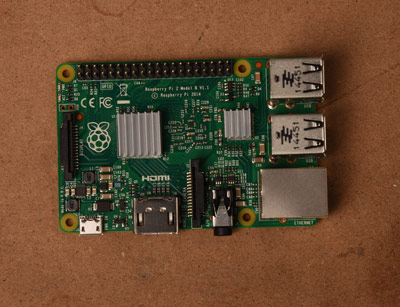 As with any project working with delicate electronics, be sure to ground yourself for static before touching the Pi

To install the necessary peripheral devices, simply plug the radio tuner and the Wi-Fi adapter into the Pi’s USB ports. 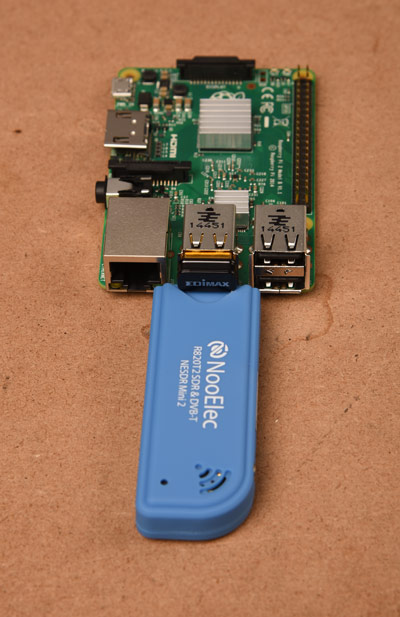 The USB ports used do not matter, but we liked the form factor of this arrangement

You can enclose the Pi in the case your starter kit provides. 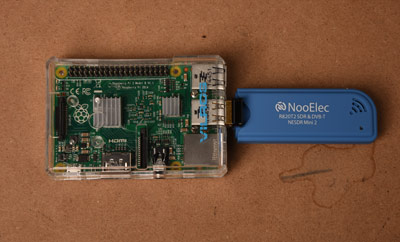 The hard drive of the unit is a microSD card, the same data storage device used in many small cameras such as the GoPro. For this step you will need to connect the card to your computer. Many modern computers have either an SD or microSD port, and our starter kit includes an adapter that allows you to go between the two. If your computer does not have a built-in port, USB card readers are available inexpensively at any office supply, electronics, or photography store. Christopher has preconfigured everything you need to load onto the card to make it work the first time you plug it in. Download the latest release from here and load it onto the card using Win32DiskImager for Windows or Pi Filler for Mac. Both programs are simple and fairly straightforward. 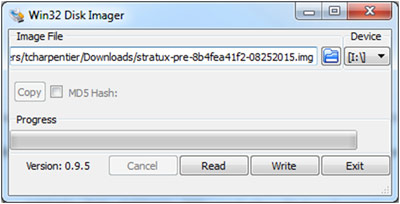 Win32DiskImager; “Image File” is the file inside the zipped folder you downloaded from Young’s website, “Device” is your card port

Once you are done loading the software, simply slide the microSD card into the slot on the underside of the Raspberry Pi. 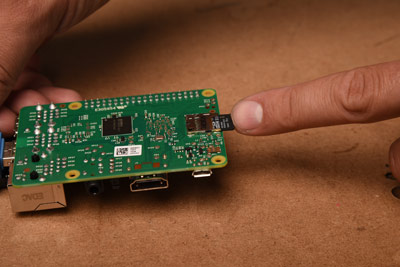 Pairing to Your App

Stratux works over Wi-Fi using the “GDL90 Protocol,” a standard data format for ADS-B in used by many receivers and most apps. For our iPad running ForeFlight, it was as simple as logging onto the Wi-Fi network broadcast by the unit, and ForeFlight automatically began using its data. Most apps other than Garmin Pilot, which exclusively uses a proprietary Garmin device, have been reported to be compatible with Stratux. 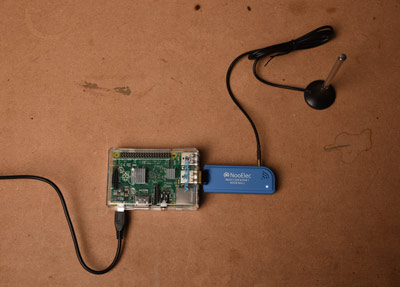 A brief flight test will confirm that the device is working. If you are using the telescopic antenna that comes with the tuner, it actually works best when retracted for this particular wavelength. We mounted ours on the glareshield pointed vertically, but depending on the construction of your aircraft this is not always necessary. 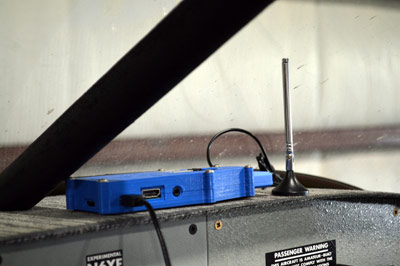 The extended cord on the antenna also allows for remote mounting

In most areas an ADS-B in signal can be had at or just above pattern altitude. You will begin receiving NEXRAD radar, METARs, TAFs, NOTAMs, TFRs, and other Flight Information Service – Broadcast (FIS-B) products. Some apps will explicitly note that these products are being received via ADS-B. With one radio tuner the unit will pick up traffic squawking ADS-B out on 978 MHz. If you are ADS-B out equipped, you will also receive TIS-B traffic. TIS-B is datalinked to FAA radar, meaning you get Mode C and primary targets. EAA is working with the FAA to expand TIS-B availability to all aircraft, not just those equipped with ADS-B out. 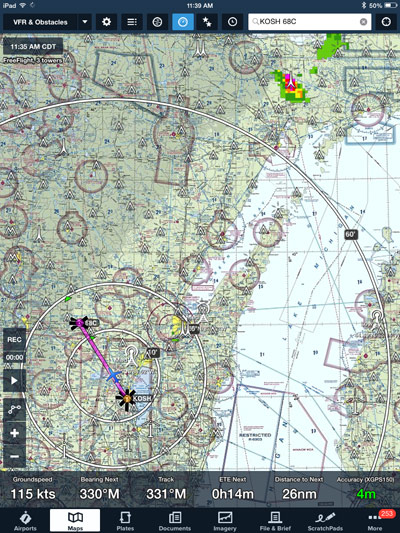 Screenshot from a recent flight to Iola, WI showing precipitation on NEXRAD radar over the U.P. (ForeFlight recognizes the unit under “FreeFlight” because that system also uses the GDL90 Protocol) 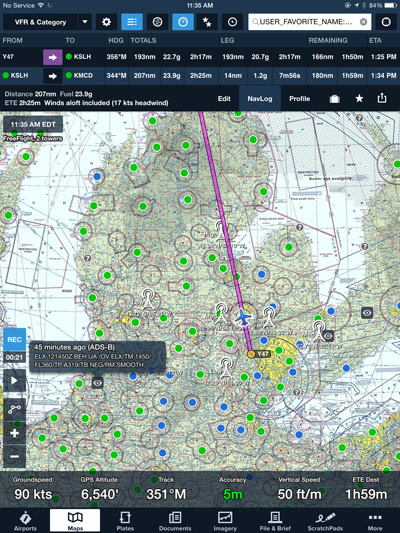 This is not an ADS-B out solution. It can quickly become confusing anytime we talk about ADS-B, but Stratux takes advantage of the in component of the system, which can be used to bring live weather and traffic to the cockpit. To be compliant under the ADS-B 2020 mandate, you will need a transponder compliant with FARs 91.225 and 91.227.

There are a number of modifications and add-ons for this device. We used a 3-D printed case specifically designed for this project and an aftermarket antenna to fit everything into a compact package (we are still testing the antenna to determine whether it is as effective as the one packaged with the tuner). 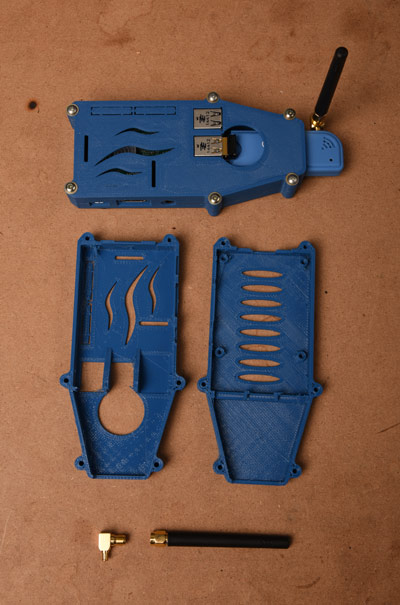 Pictured is a 978 mHZ antenna we found online; Others have reported success with the antenna off a Garmin GDL-39

For the enterprising amateur builder, a more streamlined antenna option might be to permanently mount a standard transponder antenna to the bottom of the aircraft and wire it to the unit. The tuner accepts a male MCX connector.

With a second digital radio tuner Young’s software will support traffic information from aircraft squawking on 1090 MHz, which most commercial aircraft do. He is also working on adapting a standardized gyroscope and GPS chipset to provide position and AHRS data to apps that support it.

If you want a complete, well-packaged, off-the-shelf, and, perhaps most importantly, fully supported, device, then you’ll want to check out the Stratus from our good friends at Sporty’s, not to mention the Garmin GDL-39, the Dual XGPS170, the Levil Tech iLevil, PowerFLARM, and many others. But if you want to tinker a bit, consider building your own. Just as in other aspects of homebuilding, the only limit is the builder’s imagination. The software and hardware are made to be modified and improved. We’re excited to see what you’ll come up with!

A Gyro Instrument System? (Your Options)