Sign Up for a Chapter Leadership Academy in Oshkosh

January 2018 - EAA chapters have long wondered why they couldn’t take part in local holiday parades, as doing so would be a great way to get in the public eye. The main reason was EAA’s general chapter insurance did not cover automobiles, making parades a prohibited chapter activity.

After some work by EAA’s risk management team, it was recently announced that chapters can now participate in parades with their own floats. The only stipulation is that the owner of the vehicle participating in the parade must name the chapter as an additionally insured on his or her policy. For most, this is a simple phone call and costs very little, if anything at all.

Chapter 1475 pulled along Lupita Weiner’s EAA Biplane, complete with Christmas lights and a red-nosed reindeer on board. The float was by far one of the unique features in the parade and garnered much interest from the crowd. 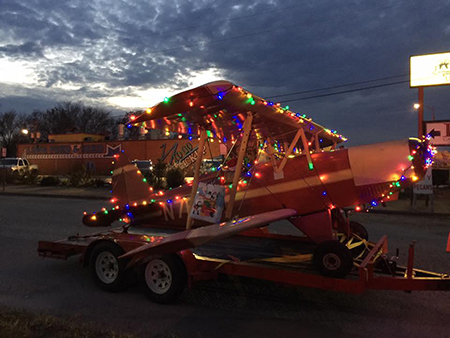 Chapter 939 used its Ford Tri-Motor model as the centerpiece of its float. A Christmas theme was placed around the model, complete with Santa loading packages in the Tri-Motor for transport.

Chapter 939 had the following to say about preparing the float for the December 2 Christmas by the Sea parade:

“These floats don’t just come together on their own. These are the efforts of many chapter members who give of their time to make the magic happen. Our first work party was held to put the platform on the trailer and move the trailer to the airport. Thanks go to Allen Burr, Will Dovel, Jerry Gable, Marty Heller, Rich Largent, and Denny Wilhelm for making this happen.

“Then the next work party was to decorate the float. Allen and Gail Burr, Kermit and Suzanne Cox, Marty Heller, Rich and Ginny Largent, Dan Smith, and Shelia Swanson came out to decorate trees and place Christmas items on the float. Thanks to their hard work, we only had to have one work party for this purpose. They did a great job.

“The final event was the actual parade on Saturday. A few items still needed to be placed on the float, as these could not withstand transport to the parade route. Our thanks go to Allen and Gail Burr, Rich and Ginny Largent, Dan Smith, and Shelia Swanson for putting the finishing touches on our float.

“The parade route was packed with youngsters and adults. We received many congratulations and thumbs-up on our float. We thank all involved with this effort and know that we could not have done it without all of you.” 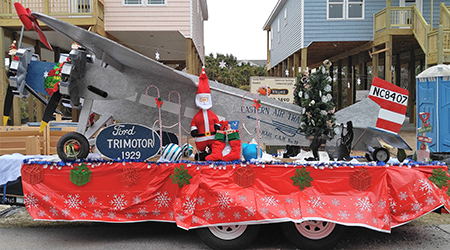 Rich Largent, EAA 512497, president of Chapter 939, said the chapter took additional precautions to ensure a safe operation. “We only tow legally licensed and roadworthy trailers,” he said. “In North Carolina inspections for trailers are not required but, that notwithstanding, we make sure our towed vehicles are completely roadworthy. We design our floats so all road lights not only work, but are visible, and as an added safety factor, we use only trailers equipped with wheel brakes. Also, we do not carry any people on the float.” 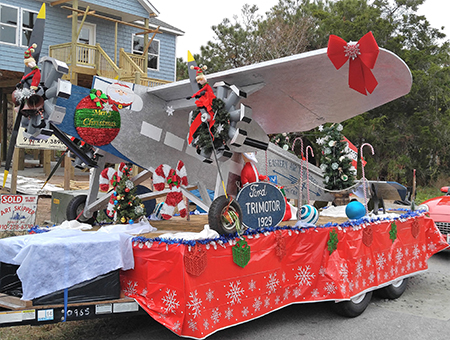 If you have any questions regarding the use of floats in an upcoming parade near you, please e-mail dleiting@eaa.org.