July 2017 - You may remember that we featured an article about the Atlas human-powered helicopter that won the AHS Sikorsky prize in 2013. The two principal people involved, Cameron Robertson and Todd Reichert, are Canadians who were based at the University of Toronto. I had the pleasure of interviewing Cameron via Skype. They also had a venture, Aerovelo, designed to win the world human-powered land speed record, and they successfully rode a bicycle to a record-beating 89.59 mph, and have many awards to their credit and even a place in the Guinness World Records book for the first human-powered flight in an aircraft with flapping wings, the ornithopter Snowbird. 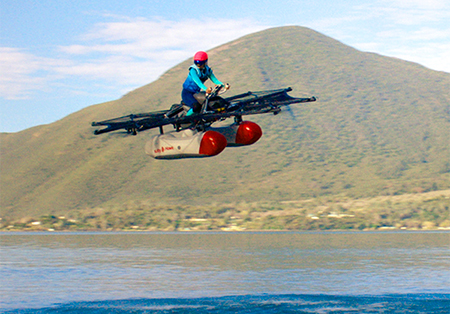 On to their latest venture, the Kitty Hawk Flyer. You may have heard about it in the press, but like me, you may not have made the Canadian connection. These two Canadian aeronautical engineers now reside in Mountain View, California, and they freely describe the Kitty Hawk prototype as nowhere near the final design. It does seem, however, that they’re locking themselves into an “over the water” design. This may be in consideration of some of the other requirements like safety, limitations to legal flight over land, etc. It’s going to be an interesting product to watch, as they propose having a product to market by the end of 2017.

You may have wondered when you saw the first Sea-Doo (another great Canadian product) if it would ever be a commercial success, but you probably know the answer to that one. It would seem that the Kitty Hawk Flyer is about to “take off” in a similar direction. It looks like it is designed for fun, rather than transportation, and the pilot sits astride a motorcycle-style configuration. It’s classed as an ultralight under FAR Part 103, so you won’t need a pilot certificate to fly it in the United States. You can find several videos on YouTube including this one.

For now, it seems that the plans are to sell them only in the United States. One could imagine the regulatory issues around a worldwide distribution network, but maybe that’s what Bombardier thought at first with the Sea-Doo!