Many of you will be familiar with the Consolidated PBY Catalina. More than 4,000 were produced for the U.S. and Allied forces between 1937 and 1945, and this aircraft was known as the Canso PBY in Canada, named after the town in Nova Scotia. Canso faces the Atlantic Ocean on the northeastern tip of mainland Nova Scotia, so it’s an appropriate naming choice for a seaplane. The designator PB stood for patrol bomber, and the Y was the designator for the manufacturer. — Ed.

Some nine years ago, six farmers from Fairview in Peace River Country in Alberta set out on what must have seemed an impossible, certainly improbable, venture. They planned to capture a Canso PBY aircraft from the banks of Sitidgi Lake (east of Inuvik, Northwest Territories) where it had been breached and transport it to Fairview to a farm shop owned by Brian Wilson where the restoration to flying condition was proposed. 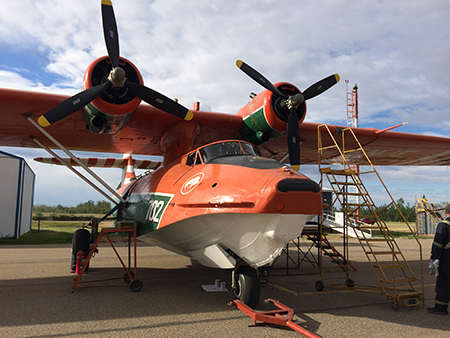 It started when Don Wieben, one of the six, was visiting with Joe McBryan of Buffalo Airways (of Ice Pilots fame) in Red Deer where Joe had just made arrangements to sell part of his fleet of Cansos to be replaced with more modern water bombers. Don, who had spent a lifetime career flying the northern parts of Canada, had a soft spot in his heart for the Canso and was not happy with the thought that this rugged, Canadian-built amphibian would be lost to the history books. He said so in no uncertain terms to Joe, who then said, “If you want a Canso so badly, there is one that had been breached on the banks of Lake Sitidgi that you can have!”

In January 2008, Don met with Doug Roy (another of the six) and his son, Brian. With the help of Google, they found Sitidgi Lake, and there on its bank they could clearly see the Canso. Soon two other farmers, Henry Dechant and Brian Wilson, joined the venture, and the decision was made that Don and his group would travel up to the site to check out this aircraft and see what obstacles might prevent the salvage. Joe Gans phoned Don and said that if Don would go up there, he would go along.

The salvage expedition was planned for the spring of that year. Norbert Luken (another farmer), heard about the trip up, so he cancelled eye surgery for the following day and announced he too would come along rounding out the group of six.

The Canso arrived at the Wilson farm in November 2008 completing phase one of the project: the retrieval of the Canso from the shore of Sitidgi Lake and transportation to Fairview.

By the following spring, the Canso’s fuselage was in Brian’s shop, and phase two of the project — “to evaluate the condition and to see if the aircraft could again be made airworthy” — began.

This is where I first heard of the salvage and diverted from a trip to the Yukon to check this out and to speak with the planners and shakers. My contact was Henry, and he introduced me to the remains of C-FNJE and the other members of the group. By this time the evaluation had been completed, and there was no doubt in Henry’s mind that this aircraft would again fly.

Although the aircraft was in salvageable condition, one of the main problems involved finding two engines and two propellers to replace ones that Buffalo Airways had salvaged when the aircraft had been breached. Henry spent many hours sourcing possible supplies, even attending EAA AirVenture Oshkosh in 2010 to talk to Basler Turbo Conversions LLC (the organization that converts piston-powered DC-3s to turbine operation).

In another part of the country during the 1990s and preceding years, the Newfoundland government owned and flew a number of Cansos in fire-fighting operations. Roger Penny was a copilot on one of these Cansos flown by his first cousin as PIC. His cousin was asked to deliver one of the Cansos to Gander, and by a twist of fate, Roger was not the copilot on this flight. The next day the aircraft, with the two men aboard, crashed, and both were killed.

Roger was heartbroken. Several years later this bunch of Cansos was also disposed of, and one went to the city of St. Anthony, Newfoundland. Roger contacted the mayor and described his dream and quest to garnish a Canso for his city of Stephenville, Newfoundland, to honour the two men lost in the accident. After hearing Roger’s story, the mayor said, “You folks deserve this aircraft,” and so it became the property of Stephenville.

This aircraft was still in pretty good shape, and the story goes that every once in a while when Roger got “partied up” he would sneak out in the middle of the night and fire up the two 1830s just to “keep ’em oiled up!”

Don heard about this and contacted Roger. They made a deal that the two usable Pratt & Whitney 1830s and their serviceable props would be exchanged for two unserviceable cores with props at no cost to the farmers. This suited the farmers just fine and also delighted the mayor of Stephenville, since Roger would no longer be able to fire up the engines in the dead of night.

Fast-forward to this spring. I read in an issue of COPA Flight magazine, that the Canso was completed and scheduled to make its inaugural flight on June 18 at the Fairview airport.

On the evening of June 17, a celebratory banquet was held in the Dunvegan Inn. The ballroom held 300 diners, and all 300 tickets were sold long before the demand was satisfied. The room was boisterous and energetic, and you could feel the excitement and anticipation of the crowd. Doug Roy was our master of ceremonies, and with the help of numerous pictures and video clips, he detailed the nine-year long struggle. 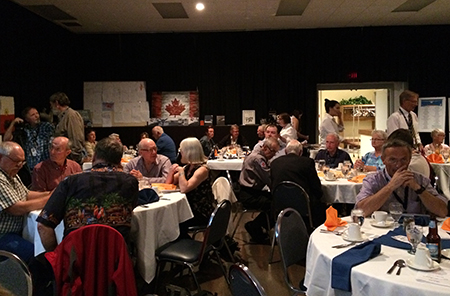 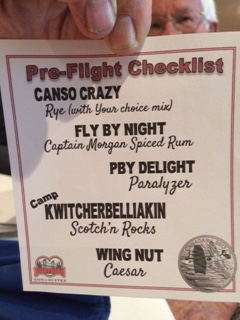 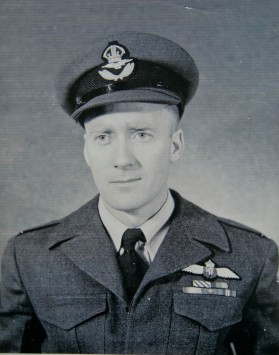 Inevitably, James and the six farmers discovered each other, and a great friendship was born. James kept in touch throughout the restoration process and at 99 years of age attended the ceremony and saw again the flight of the Canso. 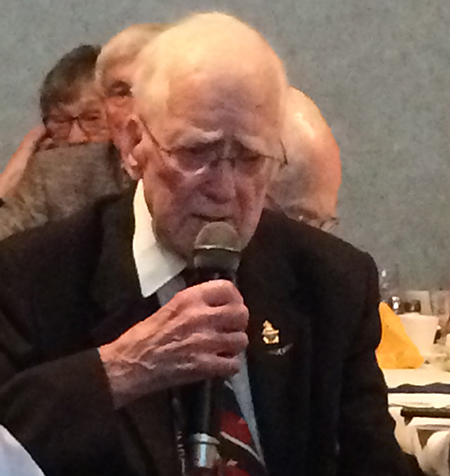 James, together with a number of veterans associated with the Cansos’ operations in the later part of the war, were honoured as the honour flight and regaled the crowd with vignettes of their experiences.

James’ son, Jim, who is a musician in Newfoundland, was also in attendance, and Jim sang his composition “Give Her Wings” in honour of his father and FNJE and all that this meant to him.

June 18 dawned with high clouds and a brisk westerly wind, but an estimated crowd of 1,000 people came to the airport for a typical pancake, eggs, and sausage breakfast anticipating the flight of FNJE. Doug wound up the activities with a short program, and the engines were started; the aircraft taxied to the far end of the runway, and the takeoff run began. The pilot held the aircraft down until abreast of the crowd and gracefully lifted off to, once again, “Give Her Wings.” 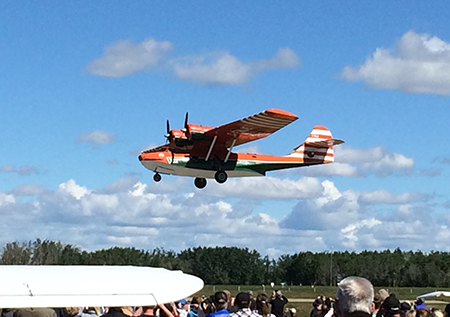 Canso PBY C-FNJE, unit 11094, was built in Cartierville, Quebec, in 1943 and delivered to the Royal Canadian Air Force where it saw service for the later years of World War II in aerial patrol, sea rescue, and as a submarine hunter, in the North Atlantic. After the war it was used as a freighter operating across northern Canada. Later, it was fitted for use as a water bomber, flying for the Newfoundland government fighting fires. It was acquired by Buffalo Airways, and in 2001 it was damaged while picking up water at Sitidgi Lake east of Inuvik, Northwest Territories, and some 250 miles north of the Arctic Circle. It was stripped of its engines, propellers, control surfaces, instruments, and avionics and left on the banks of the lake.

The story of the rescue, cartage down the Mackenzie River to Brian Wilson’s farm, and its restoration to flying condition is documented above. (See also the article “Save the Canso” archived in the June 2010 issue of Bits and Pieces). This is a truly Canadian story with its history with the RCAF and its service across our northern plains and tundra, from Pacific to Atlantic.

This restoration story has three phases: the recovery of the aircraft, the evaluation and restoration up to and including its first flight, and phase three (just now starting) showcasing its beauty and its story to Canadians as well as a wider audience. This is a truly Canadian story, and its history will be told in the displays and the flights to our audiences. In addition, plans are already underway to display this flying aircraft to our American audience at EAA AirVenture Oshkosh in an upcoming year.

If you would like to contribute to the Fairview Aircraft Restoration Society, phase three of this adventure, please contact Save the Canso. Any contribution of $20 or more will receive a tax-exempt receipt.