AirVenture 2017 — Another One for the Record Books

August 14, 2017 - By almost every measure, numbers were up for EAA AirVenture Oshkosh this year, with exhibitors, pilots, and campers all putting a strain on EAA’s resources.

For the third year in a row, Paul Dyck and I presented a forum on what it takes to fly to and from Canada. An estimated 300 people listened to the presentation, which was given Monday, Wednesday, and Friday, and most of that audience was American. All the presentations were well-attended, and the forums at the EAA Canada Tent seem to go from strength to strength. You can find a copy of the “Flying To and From Canada” presentation online. You could learn about fuel-testing your homebuilt, importing a U.S.-built aircraft, and many more topics related to flying and homebuilding north of the border. Congrats to all presenters for a great job and to Jack and Deb Dueck for showing up early to arrange the tent, clean chairs, buy supplies, and so much more.

The Canadian breakfast was extremely well-attended with almost all the 250 free tickets given out on the first day. We were honoured to present a lifetime achievement award to Werner Griesbeck. Sadly, due to ill health, he wasn’t able to make it to the presentation, but we did record it and hope that he will be able to see the video. Plans have been made to repeat the presentation closer to home.

We were giving away Tim Horton’s coffee and doughnuts on the first day, and we managed to keep the free coffee going most of the week — another little perk that we will endeavour to repeat next year.

There were Canadian Chapter campsites all over Camp Scholler this year. I had the pleasure of spending the week with Chapter 63, Winnipeg. You can read a separate article about the experience. Chapter 245, Ottawa, had a group just behind the EAA Fly-In Theater movie screen, and there were probably several others. Did you know that you can probably save about the price of your chapter insurance for the year if you camp as a chapter at Oshkosh? The reason is that most chapters have at least a subset of their members who arrive early to set up camp. Normally you would pay for those extra days, but as a chapter, not only can you get up to six contiguous camp sites roped off for you before you arrive, but you can get access to them from midweek prior to the show without having to pay more than just the camping fees for the actual week of AirVenture. There are a few areas that are excluded from that deal, but discussions are in progress as to how some of that might be changed.

Someone walked up to me and praised the many benefits of EAA’s Young Eagles program when compared to other youth aviation experiences. His comments were based on significant experience, so maybe we can put together another article on the subject. See our separate article about “Aviore,” the Young Eagles program’s latest promoter.

Blue Origin, the space company created by Amazon.com founder, Jeff Bezos, brought its reused New Shephard booster rocket to Oshkosh. We’ve seen humans who have been to space at AirVenture before, but rarely do we see aircraft that have made it that far. The paint was clearly heat-damaged, and it looked a bit like an artefact from a sci-fi movie. 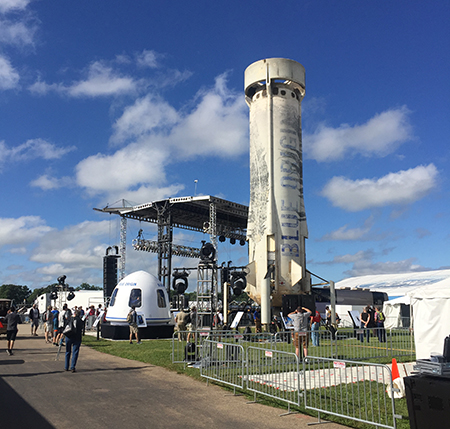 Looking like a retired control tower — the Blue Origin Booster

A full-size model of a crew capsule was also there with long lines of people waiting to get in the capsule and imagine their flight into space. If you’re one of those people who has always dreamed of going to space but didn’t make it to Oshkosh, you missed a treat. 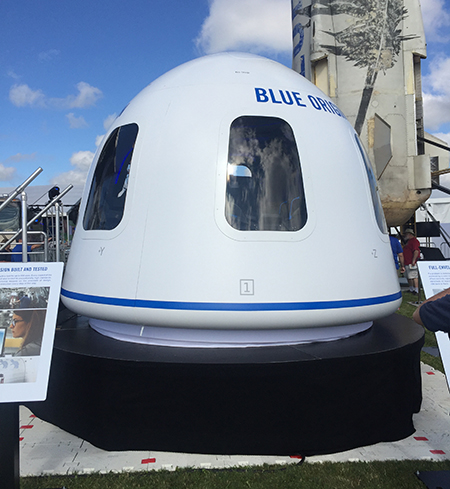 Blue Origin Crew Capsule — open to a line-up of dreamers

Perhaps this is the ultimate “homebuilt.” It’s certainly experimental. You can see a progression of stunning videos on how they have managed to launch and safely bring back to Earth both the crew capsule and the booster on Blue Origin’s website. NASA does deserve much credit for laying the groundwork, but these landings were made just last year, representing amazing progress when compared to the decades of NASA — way faster development than some of us took to build our kit aircraft!

News organizations at EAA were looking for anyone who had negative comments about Nav Canada. One reason U.S. media outlets don’t publish anything about the comparison with FAA is that it’s very hard to find anyone in Canada who is unhappy. You will notice that all the quoted comparisons are with Europe and Australia (a country with significantly less aviation than America’s nearest neighbour). There is a huge risk that the privatization of the FAA would be based on an entirely different governance model than Canada’s, explaining why there has been such a strong pushback. It was startling to hear business-minded American pilots strongly supporting a federal employee-based ATC system. EAA is strongly against privatization of the FAA, and looking at the composition of the proposed board, it’s not hard to see why! Bill H.R. 2994 is 334 pages long, and it’s unlikely that more than a handful of pilot lawyers have actually read it in its entirety. I tried, but I couldn’t find the part with the composition of the board. I did find stuff about making sure that airports had rooms for mothers with babies though. It’s easy to consider that the people who wrote the proposed act were strongly influenced by commercial interests, rather than a “public good” model. As Canadians it’s hard not be feel a little saddened that an opportunity is being missed south of the border to modernize the largest ATC system in the world.

Anyway, here endeth your Oshkosh 2017 issue of Bits and Pieces. It was a pleasure remaking old friendships and getting to know some of our readers face-to-face for the first time. Some of you promised articles for our newsletter. You know who you are. You may have missed the deadline for this issue, but you’re not off the hook. Get to it!