November 2015 - It’s a perfect day to be in San Francisco: high wispy clouds, zero wind, and a balmy 75°F. Debra and I are passengers in a private aircraft flying at 1,000 feet AGL over this beautiful City by the Bay, Fisherman’s Wharf, Alcatraz, and the Golden Gate Bridge (which it seems is always enshrouded by fog) with the pillars sticking out in majesty.

But it gets even better! The private plane is owned by EAA and is, in fact, the Aluminum Overcast, B-17G. 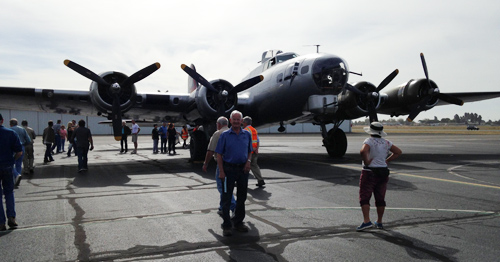 This aircraft was designed by Boeing in Seattle and manufactured under license by Vega Aircraft Company (now Lockheed), and delivered on May 18, 1945. A crew of 10 airmen were required with a pilot, copilot navigator, and bombardier. The aircraft was equipped to defend itself against enemy fighters with two waist gunners, a tail gunner, a lower ball turret gunner, an upper turret gunner, and a nose gunner. Its empty weight was 34,000 pounds, and its gross weight was listed at 65,500 pounds.

After a ground lesson, we enter this World War II Flying Fortress with its bristling armament—machine guns at the rear, the lower bubble, the side arms, and the nose. The bomb bay has bombs strung up on each side, and we begin to get a bit of the picture that faced so many brave young men as they set out repeatedly on missions deep into enemy territory with only their own armament protecting themselves against enemy aircraft determined to destroy their flying platform.

We are seated and belted in on seats in the main cabin and in the navigator/radio area for takeoff. After getting airborne we are invited to move about the aircraft, positioning ourselves in each of the areas that would have been manned by the crew, with the exception of the lower bubble and the tail gunner positions, and, of course, the cockpit. The nose-bomber position is favoured by all because of the terrific visibility allowed, and we are cautioned to occupy this space for just a few minutes so that other passengers can also take their positions here. 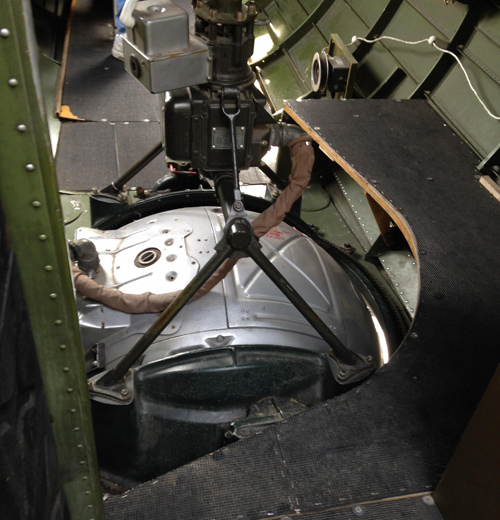 Bottom Turret (Notice the tight walkway around it)

The aircraft is flown out of Hayward, just south of the Oakland airfield, and takes a hard left turn off the northeast heading runway in order to avoid Oakland traffic. It then climbs to the assigned altitude of 1,000 feet AGL (really the same as ASL) over the bay, heading for Alcatraz. This former penal colony is a tiny island isolated from the mainland by the sea. We circle the island and head for San Francisco, flying over the Bay Bridge and then seeing the Golden Gate Bridge sticking out of the low fog. We circle back, again taking in the fantastic scenery. Before we know it, we are across the bay on a left-hand downwind to our runway. We are told to retake our seats and buckle in for the landing. The pilot touches down with an impossibly smooth kiss to the runway, and we taxi in for a debriefing. 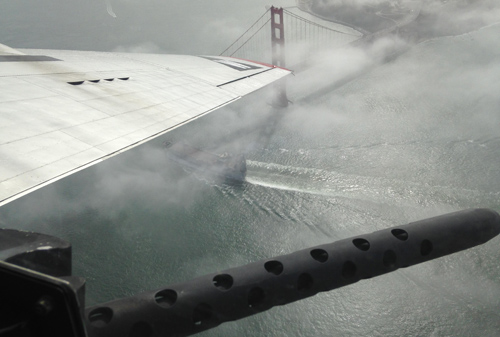 The crew chief and pilots gather us around the nose of the aircraft for a group picture, and we stand around as they talk to us about the aircraft and the purpose for which it was built.

Women built the aircraft, and women in Ferry Command also flew these aircraft to their various deployment locations. The airmen flying the missions were teenagers, usually about 18 or 19 years of age with an occasional 16- or 17-year-old kid fooling their recruitment officer of their actual age. The officer in charge of the aircraft was usually around 22 years old and was considered the “old man.” 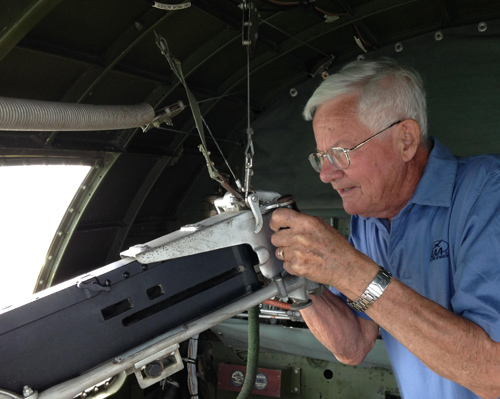 The aircraft has no “creature comforts.” The fuselage skin is what separates the inside from the outside, and the fuselage stringers, bulkheads, and structural items provide many opportunities as “head knockers,” as they are called. The control cables operating the empennage flight controls run overhead, and we had been cautioned not to grab them so as to avoid uncontrolled flight inputs. To move through the bomb bay is treacherous with a very narrow walkway. It is loud, windy, and uncomfortable.

We imagine the young crew, scared, cold, and miserable, flying a mission with the “in-charge officer” telling the crew to “keep a sharp lookout” as they enter the enemy-held territory. The temperature is 40°F below zero, they have their flying suits plugged into electric heaters and are plugged into their own respective oxygen bottles. Their apparatus makes it difficult to move around, let alone keep the sharp eye out for enemy fighters. They have gloves on since their hands would freeze touching their guns. 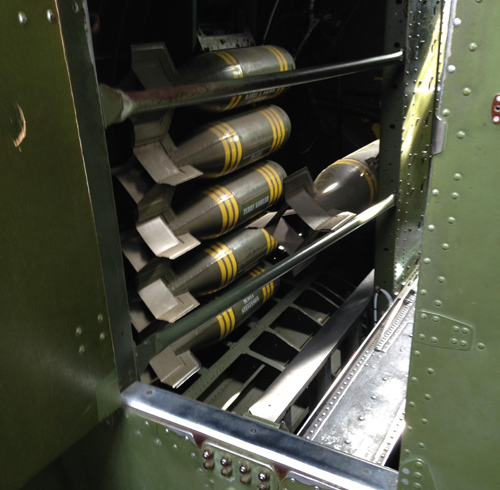 As they start their bombing run, they take on a steady flight profile while the bombardier cradles the Norton bombsight. “Steady, steady, steady,” then “bombs away,” and the aircraft can again take emergency evasive movements, evading enemy aircraft, which are now swarming around like angry hornets. As the aircraft manoeuvres in tight turns, the waist gunners are thrown about and keep their positions by holding onto their guns. 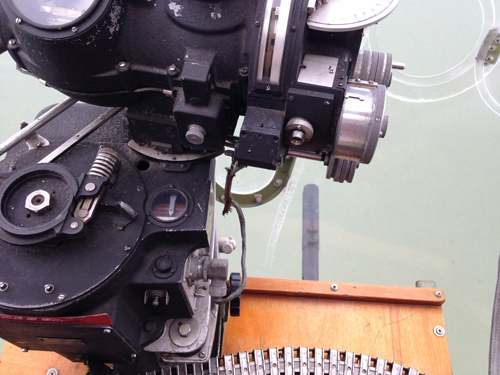 A third of these crews were lost to enemy fire, a third to accidents, and only a third made it through the war. We will never ever be able to repay these brave young men for their sacrifice to our countries and our freedoms. May we never forget!

The purpose of this adventure was to closely see the work necessary for Canadian EAA chapters to support this B-17 tour through our Canadian cities. Debra and I were able to spend time with the Hayward EAA Vintage chapter coordinator, Pat Polehia, to see the requirements necessary to host this opportunity. The chapter is tasked with the preliminary marketing that should take place starting months before the actual dates. The chapter is also required to provide six members for ground safety.

Preliminary requirements include getting the necessary permits and airport permissions. Local EMS and firefighting facilities need to be notified. Airports selected must have specified runway facilities and should have controlled entry for passengers and interested people.

The project is money-generating and each flight can carry 10 people, three of whom are crew members. A minimum of six passengers are required before the flight can justifiably take place.

Crew support is provided by two EAA goose-neck trailers that carry equipment support, as well as sales material representing the B-17. Coordination for the tours and their respective stopping locations is provided through EAA headquarters. 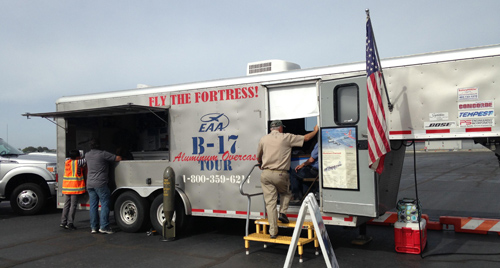 All in all, a terrific experience and one that I would urge everyone to take advantage of. EAA is presently looking into the requirements to include Canada on its tour next summer. Already several western chapters are on board and additional information will be forthcoming through your local EAA chapter.