December 2017 - In last month’s article, we introduced oil temperature control of your aircraft engine by controlling the airflow through the oil cooler. By inserting a simple butterfly valve into the air cooler we can maintain a desired 190°F to 200°F oil temperature, ensuring the burn-off of any moisture in the crankcase.

Now we introduce another method of controlling the oil temperature using a bypass valve in the oil flow to the oil cooler. 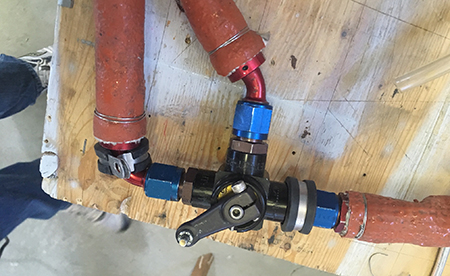 In the photo, the oil inlet is on the left, the outlet is on the right, and the bypass is at the top. The lever is connected to a control cable running to the cockpit. By adjusting this valve we can divert the oil flow to the cooler, to bypass the cooler, or to mix any flow ratio to either the cooler or the bypass.

The unit shown above is installed in an RV-10. This aircraft is stored inside a heated hangar that maintains an indoor ambient temperature of 65°F. The owner allows the oil temperature to reach at least 100°F before running up the engine in preflight. With this valve open to bypass the oil cooler, the time is reduced by several minutes.

There are many such ball valves available on the market. One supplier is Assured Automation, which manufactures a variety of three-way diverter ball valves that allow you to mix the flow of oil to the cooler or the bypass line.

In flight, this system’s response is almost immediate. Controlling a specified oil temperature of 200°F is quick and constant compared to the previous system of controlling the airflow to the oil cooler, which has a much slower response.

Although this system is more expensive than a butterfly in the air stream, it has the advantage of quick response. It will also add a small amount of weight to your aircraft.

Again referring to “Engine Cooling Tips” (EAA Sport Aviation, Sportplane Builder, August 1993), Tony Bingelis discusses the optimum oil temperature range for an aircraft engine to be above 180°F at the low end (let’s use 190° F) and 225°F at the high end.

If you have an aircraft engine with an oil cooler, either one of these systems will allow you to control the oil temperature. They also will add to the time between engine overhauls as well as reduce the cost of replacing corroded parts due to moisture in your crankcase.