Progress on my Bush Caddy 164, equipped with a LOM 337C engine and MT constant-speed propeller, had reached the stage where the choice of instruments needed to be addressed. In the beginning I leaned toward the steam gauge installation with a more modern engine monitor. Familiar, simple, and my engine was equipped already with a vacuum pump. On the other hand, it is the 21st century and using 60-year-old technology, albeit proven, was an issue. The capabilities and array of modern EFIS and engine monitoring systems (EMSs) were overwhelming.

The more I read, the more I drifted from the steam gauge direction. In the end I chose the Dynon SkyView as best suited to my desires and budget. I proceeded to purchase the 10-inch SV-D1000, EFIS with SV-ADAHRS, along with the engine monitor EMS-200, GPS-250, and two servos for the autopilot. The various pieces to the puzzle were actually bought over the period of a year as I needed them and the then exchange rate was favourable.

I was quite happy and content with the decision to install the SkyView until I looked at the 300-plus-page installation guide (not to mention the almost 200-page user manual). Maybe it was not such a good idea after all. The old-fashioned instrumentation would be a lot easier to install and use, but it was too late to worry about that now; time to wade through the installation manual.

Information overload became an issue. The manual does a good job of explaining the system; however, I was building an airplane, and I did not need to know much of the information at that point in time. The logical progression was the physical installation of the required and chosen modules - EMS, ADAHRS, angle of attack (AOA)/pitot probe, GPS, and autopilot servos. It took lot of reading to separate the information I needed to rid the concern that I might have missed something.

I began by installing the AOA/pitot probe with a mount purchased from Safair which was straightforward. The engine monitoring system required a lot of homework, especially as I was using an engine from the Czech Republic. The sensors must be defined and mapped to the pins of the EMS. Dynon provides pre-configured sensor mapping for a variety of common engines. I used as many of the Dynon sensors as possible and a Rotax oil temperature sensor and configured the EMS manually. 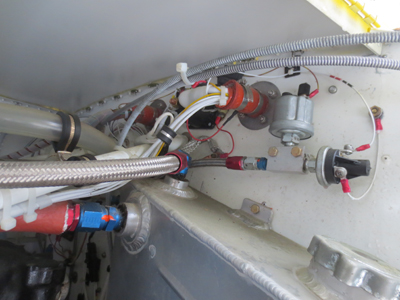 Configuration must be downloaded and installed by the user. The EMS module was mounted on the cabin side of the firewall. I used the Dynon wiring harnesses as they are reasonably priced and save a lot of time. 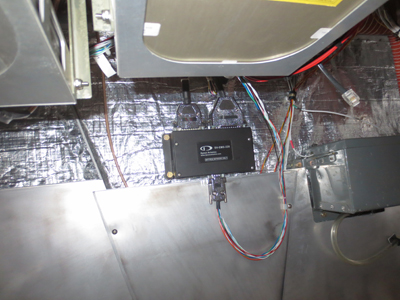 The only issue was my cylinder head temperature probes. I had ordered the wrong-size ring terminals; my spark plugs were 12 millimeters, not the 14 millimeters ordered. Although they were in the original unopened bags, I could not exchange them, as I had ordered them just over a year previously - a costly mistake as they are over $400 a set. So I contacted UMA, the manufacturer, and it rectified the problem promptly and at no charge.

I subsequently bought my backup airspeed indicator and altimeter from UMA. Most of the Dynon sensors were fitted on one side or the other of the firewall. The rpm indication is coming from the P-leads at the ignition switch terminals. 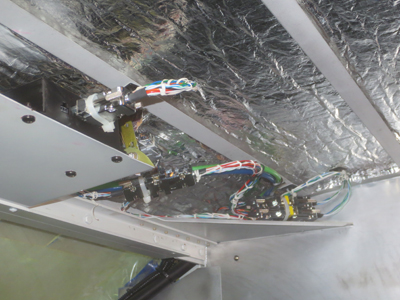 I mounted the ADAHRS deck head centre just aft of the windscreen. For the various antennas, I would mount aft away from the ADAHRS. This made it easy access for the AOA/pitot lines coming in from the wing and gave lots of room to interface the autopilot connections. The ADAHRS and autopilot servos communicate over the same network cables connecting to the SV-D1000 display. The autopilot servos required a little thought as to the position and installation. There are some mounts available for the likes of RVs, but I needed to design and build the mounts to suit the Bush Caddy.

Once the hardware was all in place, it was time to power up and configure. Back to the manual to learn how to navigate around the basic display operations and menus. As I purchased the SkyView a year previously, it was necessary to download firmware updates and the various databases for aviation and terrain from the Dynon website. Dynon supplied a 4-gigabyte memory stick for that purpose which did not work - not off to a good start - but I had a 4-gigabyte memory stick that worked fine.

From this point on, things went quite well. The system network setup was somewhat surprisingly successful as all the various modules were recognized. The engine monitoring system setup followed and was easier than anticipated. I had used the Dynon pin mapping worksheet in setting the ranges and colours. The main display was then configured into the various screens showing primary flight display, EMS, and map. There are still lots of things to do as the ADAHRS requires calibration and configuration as well as in-flight configurations. The autopilot is presently on hold until after phase one of the flight testing. 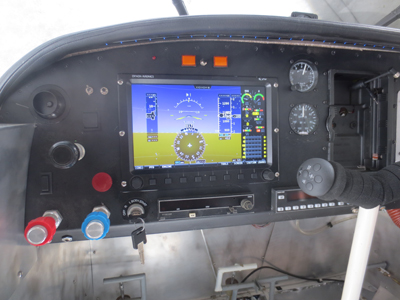 SkyView installed and fired up

It is not plug and play. Installation and commissioning of the SkyView require far more time and effort than traditional flight instruments and gauges. At first glance, the amount of information can be a bit overwhelming. At second glance, it is still overwhelming.

You had better like to read, as the 300-page installation manual (not to mention the almost 200-page user manual) is a bit daunting. You will need to wade through it over and over again - at least I did. I thought Dynon could have done a better job on the manuals. The information is all there, but it can be heavy going to find what you need.

The cost: not cheap, but a bargain by comparison.

I had few issues with the EMS installation. The manual is adequate, and fitting the various sensors was uneventful, although it took a good deal of preparation. Wiring with the Dynon harnesses went well. The Dynon wiring diagrams are very good. The configuring of the EMS was easier than expected. The same is true for the display unit. The setup menus are quite intuitive, and I found them much easier to follow than the manual that explained them.

There is still much to do, but the end is in sight. I am comfortable with the display setup, and operation is user friendly. I have no regrets about the choice and am confident that, in the long run, the SkyView will prove interesting and fulfill expectations.