There’s an old joke about the man who picks up the phone, listens, and then says, “Yes, it is, isn’t it?” His wife asks, “Who was that?” He replies, “I don’t know, just someone who said it’s a long distance from Los Angeles!” Well, this month we have an article from four people who know that trip - they flew from Steinbach, Manitoba, just about as far south in the United States as they could go, and back again. After 60 hours and 4,000 nautical miles of flying (an average over the ground speed of 67 knots – ah, those headwinds), they report that the trip was uneventful in the way that pilots always hope.

What can we do to enhance the safety of amateur-built aircraft, especially in the early stages of flight testing? It seems clear that a group of people who have put so much time and effort into building an aircraft are probably, as a group, more motivated to do a better job of flying safely than the general population of pilots, so why do the statistics seem to prove otherwise?

Generally, any sane aircraft design is capable of being flown safely, so it can’t simply be the fundamental design differences of amateur-built aircraft. In my career I learned the Six Sigma approach to process improvement and discovered the benefits of an unemotional, methodological approach to problem solving based on analysis of all the variables involved. That includes the ones which, at first glance, you might dismiss as unimportant. You can Google “Six Sigma” and spend the next few weeks studying it if you’d like, but that’s not my point.

EAA recently sent an e-mail to its American members titled “Homebuilders: We Need Your Input”, and it’s in support of a greater effort to improve safety by the National Transportation Safety Board (NTSB). It promises to bring the same process improvement benefits mentioned above by analyzing the results of the surveys. Anyone who has test-flown an amateur-built aircraft will admit to at least one unexpected finding. In my case, it was that the main carburetor jet was too small, causing the engine to run hot. I had installed a refurbished Cessna 172 O-320, and the engine-prop combination required rejetting the carb. Add all these small and maybe not-so-small findings together and you’ve got something to get analytical about.

Right now, all of our “findings” are kept pretty much to ourselves. We fix what we find. Maybe we discuss it with other pilots, but nowhere do we accumulate all that knowledge into a coherent mass so that we can begin to visualize some patterns and maybe propose some solutions. In my Six Sigma Green Belt training, we were warned not to jump ahead to the solution phase too quickly, and hopefully that won’t happen here, but gathering all that information surely has to be a step in the right direction.

Canadians can feel a bit superior in the knowledge that our amateur-built flight testing can’t be done before a ground-based fuel flow test has been accomplished and documented. We also have to obtain a separate night rating before we can fly VFR at night. Maybe there are similar ideas that might come out of the EAA Homebuilders survey. We don’t have to develop a pilot’s operating handbook (POH) here, but most of us do anyway. Maybe there should be a pro forma POH that we should all be using, based of course on the evidence of what is really necessary for safe flight in all conditions.

Anyway, all of this was written with the express intention to encourage all of you who have gone through flight-testing a homebuilt aircraft to take the survey, but it closed on April 30. I hope you took it and will consider taking any that come up in the future.

Last month we mentioned a group in the United Kingdom that is building a dozen 90-percent-scale Mk. 26B Spitfires, and I wondered whether anyone had news of the two that were registered in Canada. Paul Warman from Calgary, who was involved in the build of C-GSFP at Innovative Wings, sent me two photos. 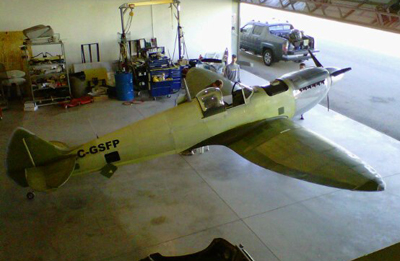 Finished Mk. 26B Spitfire replica prior to first flight 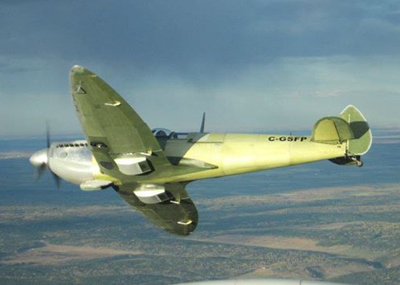 If you visit the Innovative Wings website, you can see videos of the first flight.

The aircraft is now owned by Harold Line, and I’m hopeful that we can persuade him to write something on this fascinating aircraft.

The search for flight MH370 seems to be stalling. An Australian video of a commentator in a 777 simulator provides a lot of insight into just how easy it might have been for someone inside the cockpit to carry out each of the steps that apparently did occur.

We have lots of great content this month, and as usual we’d like to thank our contributors. It doesn’t take much to write about something you love, but it does take actual time away from other things. Your efforts are greatly appreciated.

If you have any spare reading time after Bits and Pieces and this month’s issue of Sport Aviation, one of my favourite writers is Mike Busch, “The Savvy Aviator”. As well as being a regular contributor to Sport Aviation and a presenter of several EAA Webinars, Mike contributes to several blogs.

He recently wrote an article titled “How Do Piston Aircraft Engines Fail?” which taught me a lot. I’d encourage all our readers to find and read anything written by Mike. I learned that I need to get three things in my tool kit, or at least access to them - an oil testing kit, a borescope, and an oil filter cutter. These three should apparently provide a lot more peace of mind than being sure that you’ve picked out the best emergency landing spot.