Trip From Steinbach, Manitoba, to L.A.

Every spring, the aviation students at Providence University College aviation program plan a cross-country flight for spring break. Commonly referred to simply as the “Prov Trip”, it spans over 4,000 nautical miles, across nine states, and one province - all in fewer than two weeks. This year, three students building time toward commercial licences made the trek in a Piper Warrior, C-FEIN. Our instructor came along to help us, but none of the flights were logged as dual. Each student shared in the pilot-in-command time. 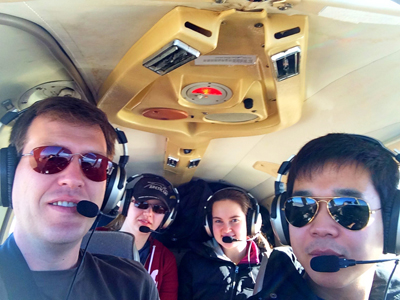 A selfie for the record

Aaron Doherty, our instructor, took the picture. Luke Kim is sitting next to him looking cool in sunglasses. Candice Wiebe is in the back on the left and Amy Johnson is next to her on the right. We battled weather, mountain waves, and turbulence all the way from Steinbach, Manitoba, across the American plains, down through Arizona, and eventually, Los Angeles, California.

On this trip there were two things that we did fairly well - and frequently. The first was “hurry up and wait”. The second was “hurry up and go, and go really fast”. The trip started off with a lot of hurrying up and waiting. The plane was cleaned, fueled, and packed, but a persistent snowstorm prevented us from getting the early start we would have liked and held us up a full day.

While following the same cold front the next day, we were again forced to stop and wait for it to slowly move out of our way. The stopping and waiting was worth it, though, because we made it to Valentine, Nebraska, before dark. There we were provided with a courtesy car for the night and took the opportunity to visit an old train bridge built in 1909. 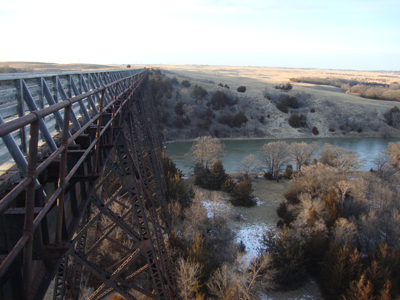 Later in the trip we saw another similar piece of architecture, almost of the same vintage. While waiting for a minor repair to be completed on the airplane, we spent the day touring the Pacific Coast Highway near Los Angeles. This took us to the Santa Monica Pier, which was also built almost a hundred years ago. The splintering boardwalk definitely took a toll on our bare feet! 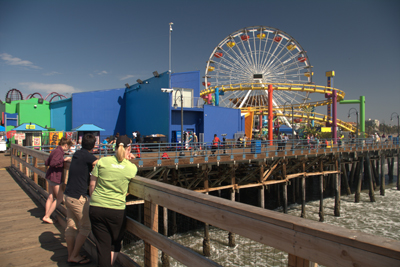 The uneven surface of the pier reminded us of the bumpy ride it took to reach Los Angeles, and the mountains that we would have to cross once again on the way home. Being “flatlanders”, we found that mountain waves aren’t something that we’re accustomed to. It was one thing to learn the theory behind them, but actually experiencing them was another story altogether.

One of the more notable differences between flying in Manitoba and flying in Arizona was the Warrior’s performance capabilities. In Steinbach on a typical March day, taking off from a 3,000-foot runway even fully loaded isn’t a huge deal. Sure, it takes a little bit longer. But you’re always fairly confident that eventually it will climb, and it does!

When the runway is 5,000 feet higher and the temperature in the high twenties, however, the density altitude makes that “easy” takeoff entirely different. Again, this was something that we knew about in theory coming into the trip, but it didn’t entirely prepare us for what seemed like a 25-feet-per-minute climb out of places such as Deming, New Mexico, Blythe, California, and the Grand Canyon. 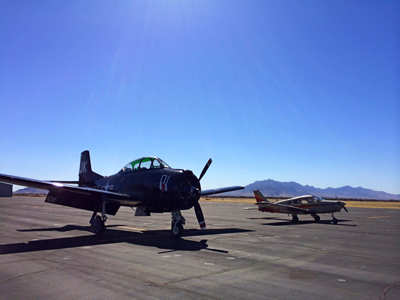 Our Warrior dwarfed by a T-28 in Deming

Near the middle of our trip, we took an extra day to visit the Grand Canyon, and let me tell you, pictures do not do this place justice. The first view over the rim is breathtaking. 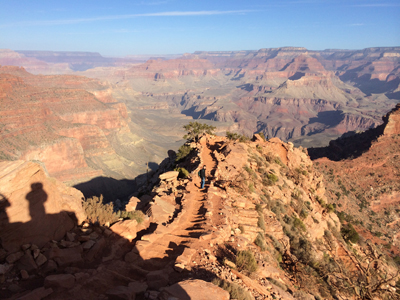 Luke takes the trail down into the Grand Canyon.

The temperature was perfect for hiking and the skies were clear as we headed down below the rim with hopes to make it at least halfway to the bottom. At first we figured that it would be easy…that is, on the way down. When we looked behind us, however, and saw how far back up we had to go, our legs felt as though we were caught in a mountain downdraft and figured it would have been easier just to keep going down. Unfortunately we would have had to carry overnight gear down with us, and we would have exceeded the weight limit in the Warrior if we had brought it. It turns out the rest of the descent is actually a lot easier than the first half. Maybe next time! 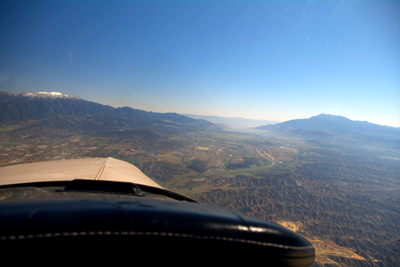 This is a view of the pass named after Phineas Banning, who is often called the “Father of the Port of Los Angeles”. He was an entrepreneur who opened up L.A. and developed the port into one of the largest in the world. 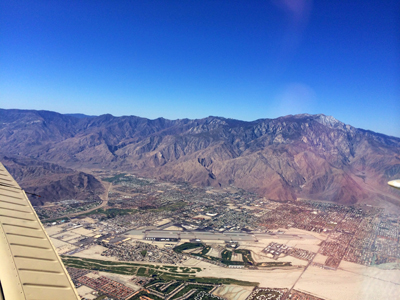 Overall, our experience in New Tribes Mission, Arizona, was probably the friendliest. The people there gave us a tour of a historic western town called Tombstone, and they got us within 15 miles of the Mexico/U.S. border. They also put us up for the night in a comfortable guest house, which beat any hotel room, and spent the entire day treating us like old friends. It was nice to be able to spend a relaxing day wandering around and enjoying the Arizona sunshine as opposed to four people in a small airplane for 60 hours! 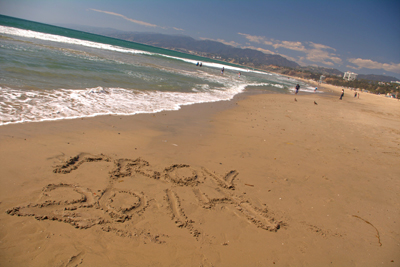 Of course, we had to document our “Prov Trip” to Santa Monica Beach.

On the way home we experienced one of the strongest headwinds that any of us had ever encountered. Traveling south we averaged a ground speed of about 115 knots. Traveling north we were getting less than 50 at times. Instead of taking us three hours to get to Moore County, Texas, it took us three hours to get to Clovis, Texas (about halfway) where we made an unplanned fuel stop, and then another three hours to finally reach our destination! Most pilots would look at that and scowl, but since we were building time, it wasn’t too much of an inconvenience.

Our hard work as a team really started to show on the last couple days coming home. We worked like a well-oiled machine. Fuel stops were a breeze, taking as little as 15 minutes to refuel, flight plan, and grab a quick snack from a vending machine. When we arrived back in Steinbach, we were greeted with warm smiles, “welcome backs”, and a ton of eager questions.

It was nice to see some familiar faces again and eat a home-cooked meal. With memories created and putting the many learned theories into practice, we returned to Providence the next day to finish the last semester of school.