Mercury Outboard Conversion for an Aircraft, Part 3 - The Cost 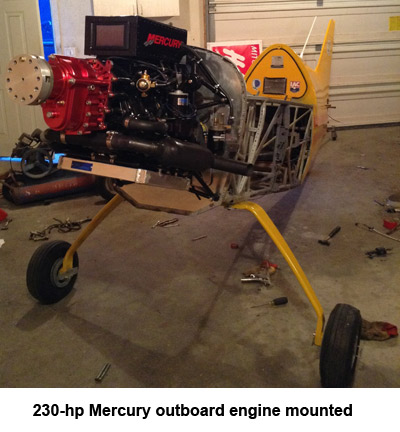 Last month I ended by talking about the cost of building an experimental engine using a Mercury outboard engine. As we all know, aircraft engines can be very costly and can cause the potential aircraft builder to stop in his tracks.

Prior to this project, I came across a small homebuilt airplane without an engine and decided the price was right for the plane, so I bought it. I was looking at VW, AeroVee, and the Geo Metro three-cylinder. After doing a price check, I went with the Geo and a Raven Redrive. For firewall-forward, I spent less than $3,500 and that included the propeller.

I know a lot of folks would rather go with an engine that comes in a kit or is complete. I like the challenge of building the engine, a nice extension of the homebuilt airplane experience.

When I started the Mercury engine project, I had no idea what aircraft it was going in, but I was after a more sporty and manoeuvrable aircraft. I figured something would show up on Barnstormers.com. I was looking for an airplane with no engine, no instrument panel, and no propeller. If you wait long enough, it always shows up.

This time it was an Acro Sport I. After a quick trip to Georgia, it was back in Minnesota in my workshop. Now I had to get serious about the engine. I found several used Mercury 200-hp engines on eBay for very reasonable prices, but I chose to follow my friend’s advice and buy good used parts from him and assemble the engine myself. He knows the used outboard part system and knew where a lot of the parts were that he didn’t have.

I started by purchasing the engine block and immediately took it to a machine shop where the folks are experts with machining outboard engines. Every week my phone would ring and another part would be found. So off to the machine shop I would go with the part. I wanted every part to be in perfect condition for this project, and every part came back from the machine shop looking like new.

After assembly of the basic engine, the total cost for parts and machining was $2,800. The adapter plates and coupler were machined by a friend who has CNC machines. His charge was five cases of beer, about $125. The gearbox was $1,500 and the propeller $2,100 - both found on Barnstormers.com.

Miscellaneous parts totaled about $500, bringing the total firewall-forward expenses to $7,000 - and a lot of blood, sweat, and tears. I would guess that would amount to about $10,000 for the average aircraft builder.

That’s not bad for 230 hp. Next month I’ll spend a little time talking about the engine mount and how each system was converted from an outboard engine to a working aircraft engine.