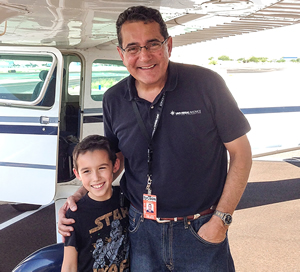 “All it took was a brief conversation with Sean D. Tucker. His energy and enthusiasm inspired me to get involved in the Young Eagles program,” DeHerrera said. “As a young man, I was motivated to learn to fly by a Cessna salesman who let me sit in a new Cessna 150.”

Universal Avionics Systems Corp. is one of the leading manufacturers of innovative avionics systems for aircraft used by corporate, military, and airline operators, and DeHerrera's participation in the Young Eagles program was one way for him to share his passion for aviation. Since starting his volunteering for the program a few months ago, DeHerrera has flown students from the Tucson, Arizona, area in his Cessna 172N, providing more than six Young Eagles with their first flight experience.

“I look forward to sharing more flights and sparking this same interest in aviation with our youth,” DeHerrera said. “It has already been an incredibly rewarding experience.”

Since 1992, more than 1.8 million Young Eagles have enjoyed a flight from EAA’s network of volunteer pilots. For many, it was the start of their journey to becoming a pilot, aircraft mechanic, air traffic controller, or many other career possibilities.

Sean D. Tucker will continue to promote and participate in the Young Eagles program throughout the year by performing at many air shows. August 16-17 he will be at the Chicago Air and Water Show, followed by the Oregon International Air Show September 20-21.