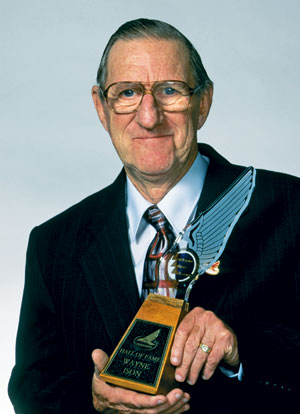 August 20, 2014 - EAA joins the ultralight and lightplane community in mourning the loss of Arthur “Wayne” Ison, an EAA Ultralight Hall of Fame inductee, who passed away on August 9. He was 90 years old. His airplane designs, including the miniMAX, HiMAX, and AirBike, were built in 34 countries.

Wayne was a veteran of World War II, serving as crewman over Normandy on D-Day and later flying missions into combat zones through the end of the war. His experiences led to an interest in the U.S. Civil War, which led him to research the battles in Tennessee. But Wayne maintained an ongoing interest in light aircraft, leading to his formation of Tennessee Engineering and Manufacturing Inc., better known as TEAM Aircraft.

Here is an excerpt from an article in the January 2001 edition of Sport Aviation - the time of his induction into the hall of fame:

“Wayne designed an airplane that could be built at a minimum cost yet provide maximum fun for recreational aviators - the miniMAX. Soon this airplane was followed by the Hi-Max, Z-Max, V-Max, Eros, and Airbike. In total, Wayne has played a role in more than 15 different light aircraft designs, and TEAM aircraft have been sold in more than 34 countries with no structural failures reported in any TEAM aircraft that have been built according to plans.

“A quiet, unassuming gentleman with a ready smile, Wayne has maintained his vision of making affordable flight possible for the average individual with an average income, and thousands of people around the world are doing just that.” Read the complete article. (Link to WayneIson-SA0100)