I’m fortunate that my local airport and its town council have decided to put on a major air show every two years. It was right in the middle of August, and boy, what a lineup! The estimated attendance was something like 40,000 - not exactly EAA AirVenture Oshkosh, but then again I’ve never had the Snowbirds practising over my own house before. 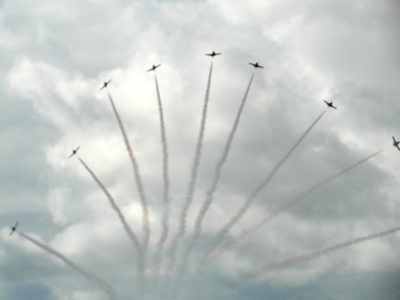 Amazing precision of the Snowbirds

As you will see in the separate article, I was fortunate enough to be able to snag an hour with Carol Pilon during her busy flying schedule. The interview was conducted once she’d flown that day, and there was a CF18 in a nice paint job roaring overhead while we spoke. 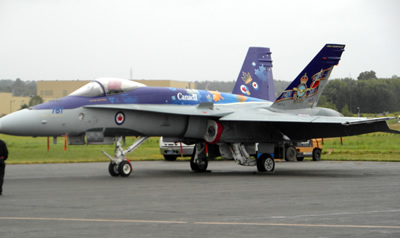 I have to say that an air show at a smaller venue has its benefits. Not only did I meet Carol, but I also shook hands with one of my aviation idols, Manfred Radius, Ontario-based glider pilot genius of air shows. Watching his wingtip smoke starting around 4,000 feet and listening to his beautiful calm soundtrack was a real contrast to, well, all the noise, I guess. In fact, audience members seemed to have become so conditioned to turning their heads upon hearing a roaring engine that they didn’t notice when the announcer told us that Manfred had released from his towplane. But pretty soon everyone was mesmerised. At the end of the day it was interesting to watch Manfred taking care of wrapping up his “baby”. Note the “Aviators” hat he’s wearing; Manfred appeared on an episode of that TV show and taught the show’s producer and host Anthony Nalli the basics of looping a glider. Manfred mentioned that not everyone has the stomach for it, if you get my drift! He also mentioned he’s a reader of our newsletter, so hi, Manfred. 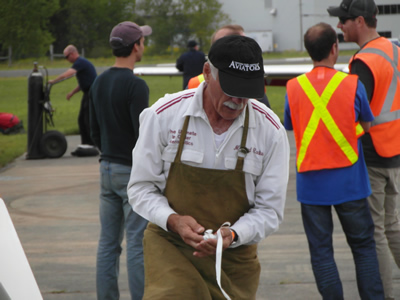 There were continuous lineups to tour a newly reminted CC130J RCAF Hercules, and people seemed content to stand for hours just to get the opportunity. Apparently this aircraft had only just over 100 hours on her since refit. Climbing to altitude in 50 percent less time and going further, higher, faster, with an all-glass cockpit are just some of her features. 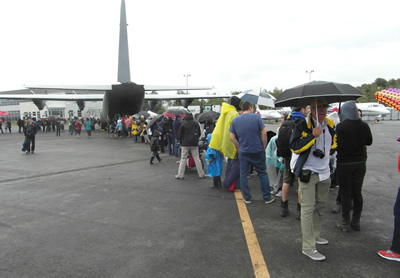 Folks don’t often get this chance – this was the shortest the lines ever got.

Rick Volker did a super aerobatic routine in his 1952 Harvard Mk. IV. I was lucky enough to be standing next to his wife, Trish, while he was doing his preflight. She explained that, although he’s a dentist in daily life, he flies before work pretty much every day in Niagara Falls. He pulls +11g and -9g in his performances; so he’s obviously super fit and he looks it. He has an incredible list of achievements including being an appropriately named ACE (aerobatic competency evaluator). Rick is also one of the few people in the world who has time on a Messerschmitt Bf 109E. 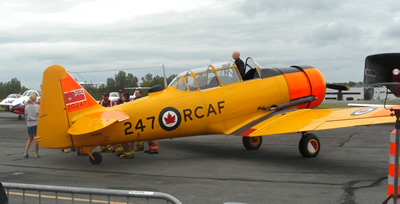 Firemen being told, “This is how you get me out.”

There was way too much activity on the ground to mention in a brief article like this, but it was good to see some of the local industries such as GE Aircraft Engines get involved in sponsoring a tent, and I have a soft spot for Air Cadets, having been the parent of one. Thank you, Gaetan Gagnon and the other parents and cadets for staffing the Air Cadet display. There was continuous interest, and many youngsters and their parents learned what the Air Cadet League is all about. 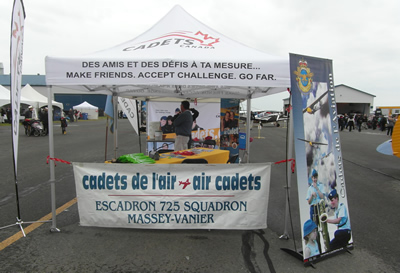 A rare quiet moment at the Air Cadet booth.

You can read about the air show performers on the air show’s website, and there are some fabulous photographs of the event on Flickr.

Hopefully they’ll be back in two years with a show just as big. See you there.