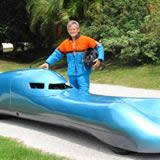 The best stories often begin, “I met this guy.” Well, I did. Spending some time in a drumming circle on a beach near Venice, Florida, last winter, I found myself next to a guy who had a really interesting tale to tell. He’s a pretty good drummer, but his real passion is to try to take the steam land speed record back to the United States.

It’s currently held by a British driver. In August 2009, Charles Burnett III of the “Inspiration” team of Great Britain recorded a two-way average speed of 139.843 mph (225.06 kilometers/hour) at Edwards Air Force Base, California.

It’s strange to note that, according to the Fédération, land speed records have only ever been held by two countries in the last hundred years - the United Kingdom and the United States. Such iconic characters as Donald Campbell and his famous Bluebird held the absolute record which is currently held by Andy Green, another Brit. That record stands at just over 763 mph (1,228 kilometers/hour) using a turbofan engine. Campbell died in an attempt to break his own water speed record in 1967, and he’s the only person ever to have broken land and water speed records in the same year.

Getting back to the story about my friend Chuk Williams, the steam-engined race car they built is driven by a steam turbine, and their goal is to exceed 140 mph on Bonneville Salt Flats, Utah. There was another event in August in which they failed to attend due to mechanical issues, but by the time you read this, they hopefully will have had successful runs at the World of Speed event during September 6 to 9. The never-ratified but generally agreed fastest speed was actually 145 mph by the Steamin’ Demon, but unfortunately a door flew open, then a fire started, and the car was unable to complete the return run. Perhaps the Steam Speed America team will beat that, too, and set the record straight.

By the way, Chuk is a retired commercial pilot, professional diver, and musician. He’s a tinkerer and drives a steam car around town that he built himself. It’s based on a Model-T chassis and an assortment of steam parts including the mandatory whistle.

Late update:  Apparently Chuk’s car rolled over in Bonneville at 147mph after the chute had been opened.  He suffered multiple fractures but is apparently healing well and hoping to go home soon. We wish him a speedy recovery. You can follow his progress on Facebook.