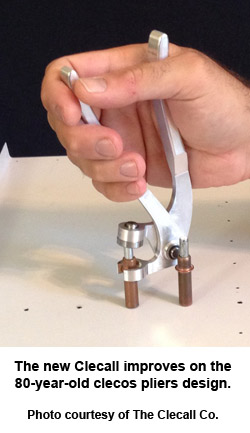 September 17, 2014 - As the saying goes, necessity is the mother of invention. In Christopher Braun’s case, building a Zenith CH 750 STOL in his garage provided the inspiration to reimagine a tool that’s been around for about 80 years. His completely redesigned Cleco pliers, the Clecall, has an upright orientation allowing easier access when working in tight areas, are 70 percent lighter than traditional Cleco pliers, and should result in far less fatigue from continuous inserting and removing of Clecos.

Braun, EAA 808722, of Roseville, California, started experiencing hand and wrist pain within weeks of starting his own project. He was told by other builders that this is “just the way it is” when working with large quantities of Clecos, but Braun worried that numbness and wrist pain could develop into a serious repetitive stress injury like carpal tunnel syndrome.

In 2012 he began analyzing how he might get his natural hand and wrist angle to work with Cleco pliers. After creating various cardboard and aluminum designs, he employed 3-D printing to fashion a working plastic prototype, then fine-tuned it over the ensuing weeks to create an aluminum prototype - the Clecall - that he’s now selling.

The Clecall Company is headquartered in Rocklin, California. CNC-machined out of solid aluminum billet, Clecalls are and now available for an introductory price of $29.50 through the company’s website.

Since becoming available on September 11, the Clecall has been incredibly popular – in fact, new purchases are currently on backorder to October 15, 2014, according to the website.

“The builders and mechanics that we have spoken to are very excited about the feel of the new Cleco plier and the speed in which it can be used on projects,” he said. “Clecall is thrilled that users around the world will begin to experience less pain and headache when using the ergonomically designed tool.”

At about six weeks away from completing his CH 750 STOL, Braun observed, “It is amazing what a project can teach you over the course of 18 months.”