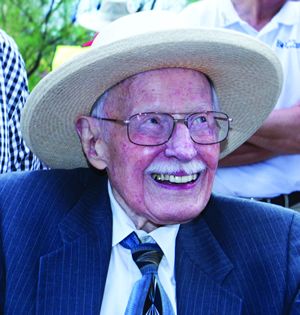 September 25, 2014 – Robert L. “Bob” Hoover has been named recipient of this year’s Wright Brothers Memorial Trophy from the National Aeronautic Association (NAA). The honor will be presented at the Wright Memorial Dinner on Friday, December 12, in Washington, D.C.

The trophy, one of the most important, historic, and visible aviation and aerospace awards in the world, is awarded annually to a living American for “…significant public service of enduring value to aviation in the United States,” according to the NAA. It reflects a timeline of aviation and aerospace’s most innovative inventors, explorers, industrialists, and public servants.

“There are very few people in the world that capture the history, progress, importance, and sheer excitement of aviation and aerospace like Bob Hoover,” said Jim Albaugh, NAA chairman and a member of the selection committee. “For 70 years he has set the standard for skill, leadership, and bravery which may last forever.”

An icon of the aviation community, Hoover is considered one of the great pilots in history. At the age of 92, he is a living bridge from the origins of flight and space travel to the present, having personally known industry giants such as Orville Wright, Eddie Rickenbacker, Charles Lindbergh, Chuck Yeager, Jacqueline Cochran, Neil Armstrong, Yuri Gagarin, and James H. Doolittle – who called him, “the greatest stick-and-rudder man who ever lived.” The Centennial of Flight edition of Air & Space/Smithsonian magazine named him the third greatest aviator in history.

With the onset of World War II, Hoover enlisted in the Tennessee Army National Guard and, subsequently, entered United States Army Pilot Training. Upon completion, he was sent to England and, after the Allied invasion of North Africa, was stationed in Casablanca, where he flight-tested aircraft that had been shipped from the United States and reassembled. Later assigned to the 52nd Fighter Group stationed in Sicily, he flew 58 successful missions before being shot down off the coast of Southern France. That 59th mission led to his capture by the Germans and a 16-month detainment in the Stalag Luft 1 prison camp – where he famously stole a Focke-Wulf Fw 190 German fighter plane and escaped.

In recognition of his outstanding military service, he was awarded the Distinguished Flying Cross, the Soldier’s Medal for valor, the Air Medal with clusters, the Purple Heart, and the French Croix de Guerre.

But it was Hoover’s exceptional skill and precision as the world’s greatest air show pilot that made him an inspiration and example to pilots around the world. In over 50 years of flying, he is believed to have performed in more air shows, in more types of aircraft, in more countries, and before more spectators than any other pilot in the history of aviation.

His performances in the Shrike Commander were among his most thrilling exhibitions as he swooped, rolled, looped, and finally maneuvered the aircraft to a landing with no engines running, following his famed “energy management sequence.” As a tribute to Hoover’s legacy, the Shrike Commander was put on display at the National Air and Space Museum’s Steven F. Udvar-Hazy Center.