Homebuilders Hall of Famer’s Design to Be Certificated in Argentina

October 9, 2014 - The legacy of the late Ladislao Pazmany, EAA 2431 and EAA Homebuilders Hall of Fame inductee, lives on in many of his homebuilt airplanes flying around the world, but especially in Argentina where his PL-2 design is being certificated as a primary training aircraft by the Argentine Air Force. Pazmany, who passed away in 2006 at age 82, was inducted to the EAA Hall of Fame in 1997 in recognition of his numerous airplane designs including the PL-1, PL-2, PL-4, and PL-9A Stork, a 3/4 scale version of the German Fieseler Storch warbird. 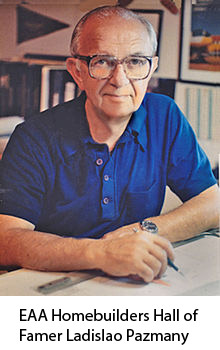 His widow, Margarita, who continues to make aircraft plans available through the Pazmany Aircraft Corporation in San Diego, California, reports the two-place, side-by-side PL-2 has been selected among several other competing designs to be certificated as a primary training aircraft by the Argentine Air Force. Students at the National College of Technical Education No. 1 in El Palomar, Buenos Aires, completed one PL-2 that recently had its maiden flight.

“Authorization to go ahead and permission to start certificating the aircraft has been received,” she said. That process is under way by Argentina’s National Civil Aviation Agency, and working with the directorate general for research and development of the Jet Trainer Elementary School, Pazmany Aircraft Corporation will provide technical support for all procedures required by the certification process. After acquiring the certification, 15 PL-2s will be built by students under the supervision of instructors and aeronautical engineers.

The Pazmany PL-2 aluminum airplane with a tricycle landing gear was first introduced in the early 1960s and became popular with builders around the world. It was also adopted as a trainer plane for air cadets in six Asian countries. About 300 examples are flying worldwide.

A native of Hungary, Pazmany’s family moved to Argentina in 1926 when he was a toddler. He made his first model plane at age 5 and developed an interest in trains, planes, and engines. Pazmany learned to fly at age 15 in a Piper J-3 Cub, attended the prestigious Escuela Tecnica Otto Krause, then spent four years studying aeronautical engineering at the Universidad Nacional de La Plata.

He and Margarita were married in 1948, and they relocated to the United States in 1956 where he joined Convair and worked on the company’s innovative Delta wing designed jets – the F-102 Delta Dagger and F-106 Delta Dart.

Within a month of their arrival, Pazmany attended his first Experimental Aircraft Association Chapter 14 meeting and became an EAA member. He conducted the Pazmany Efficiency Contest at the annual EAA convention and fly-in at Oshkosh, Wisconsin, for many years, a real-world evaluation of homebuilt performance. Pazmany also authored Light Airplane Design, and Landing Gear Design for Light Aircraft, considered staples for aircraft designers.