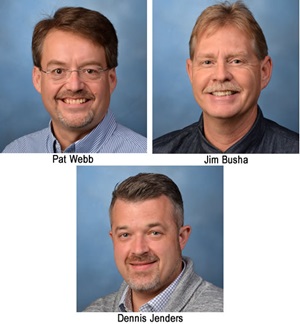 October 29, 2014 - EAA has announced a number of staff additions at its headquarters in Oshkosh, Wisconsin. They include Pat Webb, director of chapters; Jim Busha, director of publications; and Dennis Jenders, director of marketing.

Webb is an avid aviator and member of EAA Chapter 919 and Vintage Aircraft Association Chapter 13 in the Rochester, Minnesota, area. He will be responsible for maintaining and building EAA’s relationships with its nearly 1,000 local chapters and supporting the growth of those chapters. Webb brings analysis, technology, and project management experience to EAA from the telecommunications and healthcare industries.

Busha will have responsibility for production of all EAA print and electronic publications, including EAA’s flagship magazine, Sport Aviation. A longtime pilot, he will maintain his involvement in EAA’s Vintage Airplane and Warbirds magazines that serve EAA’s special interest communities. Busha has been a frequent contributor to Sport Aviation and other aviation publications. Busha comes to EAA after retiring as a lieutenant from the Oshkosh Police Department, where he served for 30 years.

Jenders has extensive experience in branding, digital strategies, and marketing innovation. He most recently was part of senior management teams at well-known Wisconsin marketing firms 7Summits and Laughlin Constable where he developed award-winning national and regional projects. Jenders also serves as an adjunct professor at Marquette University, where he teaches classes in emerging and social media.