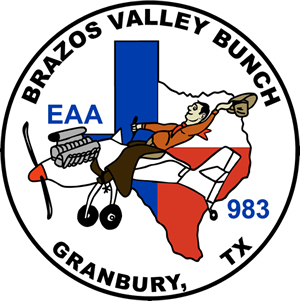 October 29, 2014 - The Wright Brothers Master Pilot Award is presented by the FAA Safety Team (FAASTeam) to pilots who have been certificated and flying for 50 consecutive years without an accident. On November 8, FAA officials will be on hand at the regular monthly meeting of EAA Chapter 983, Granbury, Texas, to present 13 pilots with this prestigious award.

It’s thought to be the most recipients ever to be honored in one ceremony in Texas and likely the entire country, according to Joe Murphy, local FAA Safety Team leader. EAA Chapter 983 is based at The Landings Airpark, 65 miles southwest of the Dallas/Fort Worth International Airport with more than 150 aircraft, helicopters, and ultralights based there.

Considering that one can obtain a private pilot certificate as young as age 17, a pilot must be at least 67 years old to submit an application for the award. It is an honor and a testament to the pilot’s skill, safety record, longevity, and continued health to qualify.

The list of honorees and their spouses to be honored November 8:

Also slated to receive the honor are Ed and Ruby Brown and Bob and Barbara Winegar.

What’s more amazing, according to Tom Woodward, Chapter 983 newsletter editor, the chapter already has six designated Wright Brothers Master Pilots, including Bruce Wilson, Sid Tucker, Tom Eanes, Terry Strange, Henry Erlich, and Jim Crain. Plus there are four other chapter members who are eligible to apply for the award. That means Chapter 983 could soon have as many as 23 Wright Brothers Master Pilots in its ranks!

The presentation on November 8 will be conducted by Joe Murphy, local FAA Safety Team leader, along with other FAA dignitaries. The honorees include former U.S. Air Force Thunderbirds pilot Mack Angel. Five of the recipients are former airline pilots, and eight are former military pilots.

They will each receive a certificate, lapel pin, and their names will be added to the Wright Brothers Master Pilot Award Roll of Honor, which lists close to 3,000 Master Pilots. EAA offers its congratulations to all the pilots!