Annual Inspection – The Bakeng Deuce, Part 4: The Sounds in the Silence

While in the rear seat, the flight controls were operated for travel, safety, and soundness. Actually, smoothness also mattered here. When the aileron control was moved quickly, a sound could be heard. When moved slowly, a ratcheting could be felt. Why?

We got out and moved from wing to wing, moving the ailerons and listening. Inside the left wing, near to the pulley, that changed the control path to fore and aft; that sound could be heard. The four hand panels were opened and there it is. The forward cable passes through the wing main spar as it has since 1984. One can hear it and see it ratchet at the spar.

(This is the 32nd anniversary of the completion of this aircraft. You would have thought that one of the other 31 people to inspect this aircraft would have found this. This is the reason why owners go to aircraft maintenance engineers for inspections. It also may demonstrate the difference between an aircraft inspector and everyone else who inspects aircraft.)

The control was disconnected, the cable secured out of the way, and using a small rattail file, control cable clearance was gradually provided until the sound and feel of ratcheting were gone. We’ll use a tiny amount of lacquer on a tiny brush to seal the wood.

It was not that the rear cockpit inspection was complete, but the snags were complete; and we moved forward.

For this article, I will deal with the two instrument panels as one. I’m at seven pages now. 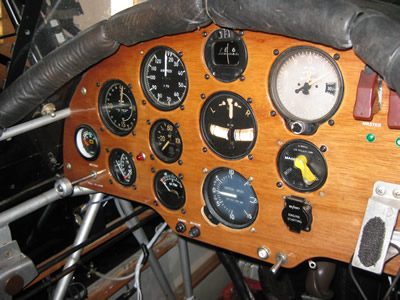 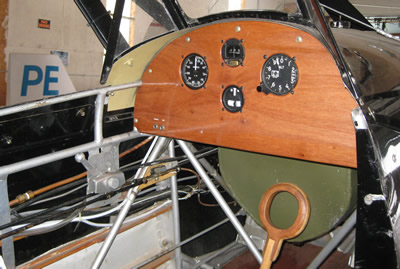 We closed the panels in one area before opening another. Also, we made note of what tools and equipment were brought to the aircraft. A better way is to use a sheet of cardboard on the tabletop. Draw an outline around each tool. At the end of this day, place each tool in its outline. When they are all present, you can close up. In the world of maintenance and human factors, tool control is an important matter.

As the days progressed, the boxes of equipment grew. They eventually filled the trunk and all the seats of my car. Tool control mattered more and more. That Pentax Flexscope we used comes in a big box as does the power supply and power cord. Primarily it’s used to inspect the aft fuselage and wing interior. We wondered what the others did.

During the third day, the forward cockpit interior and exterior were inspected. The floor panels were removed for this. As soon as they were up, you could see all the debris and foreign objects that had accumulated. We like to clean this out so that everything else can be seen. There was a small amount of brake fluid (AeroShell 4 or MIL 5606) and red in colour. It really attracted the dirt. I found it important not to fill the master brake reservoirs to the top. The fluid tends to wick out.

Both the aileron and elevator control paths begin here. First, it is important to move the controls a tiny bit just to see how much play there is. Is it enough to cause flutter? These controls are very firm, but they are not attractive to my eyes. All sorts of blocks and brackets are used to eliminate play. On our Sonerai II, it is all 4130 steel fabricated to a drawing. We find they feel better, smoother as well. Each bit of hardware in the Nicopress system needs its drop of oil and an open eye, if even for an instant. Together they take time. It is also important to ensure that each control reaches its stops or otherwise has full travel.

The rudder pedals and brake linkage are also here. All these systems are similar, probably designed by Curtis Pitts and quite a while ago. They are 4130 welded steel and very capable. Yet some implementations are more capable and tidy than others.

The rudders operate the tail wheel steering. In this case, a very expensive Scott tail wheel is used. It is about 30 years old and shows some wear. The advantage is that the aircraft can be swung 360 degrees and even pushed back. The tradeoff is that feature may allow tailwheel shimmy, especially on asphalt. You can tighten the steering springs and chains, but that does not eliminate wear. On grass, shimmy is not very noticeable. I will be flying mostly off grass.

The brake linkages and fluid lines are all metal. While not like the crisp-as-glass brakes my Goldwing had, the brakes are very firm, the pads like new. Since the reservoirs were serviced, there is neither noticeable play nor softness in the brakes.

Tiny things in an aircraft can tell quite a story. The chap I bought the Deuce from remarked the brakes were not that good. So on pre-buy inspection I looked at the master cylinder fill caps. They had a layer of dust. When removed, one realized the dust was there because the brake fluid was not replenished. The brake pedal could be depressed any amount you desire since little if any fluid was present. That’s why the brakes were not good.

More important, if the brake fluid was not replenished since the time of dust, just exactly what else needed servicing on this aircraft? This series is about half done and I’m on the ninth page. “What else?” in this case means quite a few things. No offense is meant to the seller.

However, if you are the buyer, ask yourself what sort of things would tell the story of your prospective aircraft and the way it was maintained. The answer might be as simple as a cap or plug. We’ve said elsewhere this aircraft followed us home. It owes us nothing. One can well spend a few hundred dollars on maintenance.

Also, the front cockpit has a second throttle, carb heat, and mixture. The mixture does not go in all the way but bounces about a quarter inch from the firewall. We would not find out why until we inspected the engine compartment. For now, it works.

The throttle seemed to operate smoothly. It has a friction knob to prevent throttle migration. However, that throttle lock feature also locks the throttle to the carb heat. Near full throttle, the carb heat may move with the throttle. During takeoff and landing operations, it might be wise to loosen the lock. Jamming one control with one finger while operating the locked throttle with the others is something you don’t need while flying near or down to the ground.

Speaking of carb heat, we did notice that there was a spot where the mechanism resisted movement. It seemed to “catch” a little there. We would not know the half of it until we got to the engine.

The remaining T&B indicator is in the rear cockpit. It is vacuum powered but would not work during the first maintenance check flight. The vacuum lines run down the left side of the fuselage interior to a venturi tube. The tube itself is a bit small - half of what we’d like - but what caught our eye is the kink(s) in the vacuum lines. It’s hard to get a vacuum instrument to operate when supplied by kinked lines.

Right before our eyes in the front cockpit is the instrument panel. It’s nice to look at, but it’s really just for show. Perhaps the altimeter works, but how accurate is it? The quality of airspeed indicators and altimeters really matters, but so does age. A cheap new instrument may only last a single summer. One might do better to have an older but reputable indicator overhauled and green tagged. Air Research comes to mind.

The forward cockpit also has a windshield and door on the right side. The windscreen needs to be inspected itself but also the row of bolts that retain it. Or is this why barnstormers all wear goggles? That door has hinges and double lathes. A very little oil here and on all the control pivots completed our work, at least for today. Remember the controls?

Since the main or header tank was removed, it has already been possible to remove all the panels and inspect the forward fuselage up to the firewall. The fuel snags we found are all described above. It is important to lubricate the fuel selector valve with a fuel-resistant grease. Any nonpetroleum or Teflon-based low temperature grease will do. Your oil can will not. We used DC-33 grease. Yes, it is very expensive. So is your life. But I have not told you to spend lots of money here, have I? It can be used elsewhere such as lubricating the seal on your engine oil filter. DC-33 is good. DC-4 is the best for that.

At this point, the floor panels can be screwed down and the door closed. We are ready to move. In this case, move still means forward…into the engine compartment.