Those of you who have followed the progress of my RV-9A flip-over through its rebuild might have been wondering what’s been happening. Yes, it’s been awfully quiet, largely because of spending the time on the rebuild rather than writing about it.

Well, we finally got the beast repainted, a last few jobs done, and off to the airport. The old adage about “90 percent done, 90 percent still to do” has rung especially true on this project. Having never noticed that the rudder, with cables attached, cannot actually contact the right stop because of interference with the routing of the cable, I went through that investigation with Van’s and discovered a rather casual “oh, yeah, they’re all like that - don’t worry about it” response.

The problem is that the swaged forward end of the rudder cable will not pass through the routing grommet, especially on the passenger side where it forms a nearly 45-degree angle. The reassurance from Van’s explained that in flight you rarely deflect the rudder more than an inch, and not that much more while taxiing in a crosswind. Of course, on the ground you also have brakes to help steer.

All the same, I would have expected some sort of refinement of the drawings to fix this. In fact there is some discussion on the bulletin boards about the rudder stops themselves and whether the drawings work for everyone. I think it has to do in part with whether the rudder pivot points are exactly right or further in or out.

I was away from home for a while and came back to discover that the rudder had shaken loose my control lock and punched a hole in one side of the skin in a gale. This indicated that the rudder stops had previously been inadequate to prevent damage and that my control lock was inadequate, too! I had used a U-shaped pin and holes drilled in the rudder horn and rudder stops, but the legs of the U were too short. The 60- to 80-kph winds from directly aft had managed to wiggle the lock loose.

We borrowed a trailer from the airport and moved the fuselage first, with empennage already mounted. 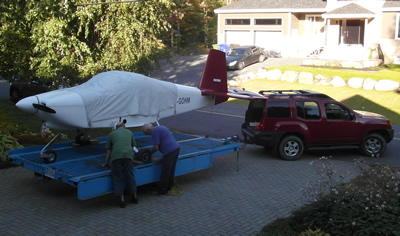 The next day, we moved the wings. We didn’t want to leave the wings at the airport unattached, so we took them the next day with enough time to get them mostly installed. 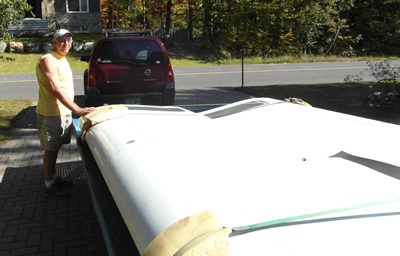 Wings the next day

Remember that the rebuild was because of a flip-over. Having removed the starter, I looked at it before attaching it to the rebuild and it looked nice and clean. But there was an ominous sound on turning the motor over for the first time, and the starter started sparking from one of the rear bolts!

Apparently there was some dirt that must have fallen inside the starter, and it must have gotten down where the brushes are. One hundred and sixty dollars later it was rebuilt, leaving only the case and maybe a couple of bolts from the original starter. Sky-Tec personnel were very responsive and willing to try to repair it for free, but I’m sure when they saw the cause they would have had to charge for the repair. Our local village has an excellent repair shop and I got the rebuild done in one day. Sometimes it’s worth a few bucks to resolve a problem quickly.

I was really hoping to announce a first flight in this issue, but that will have to wait. The wings are on, and all those last reattachment jobs are close to being finished. The temptation to make it better than the first time stretched things out a bit. I’m sure none of you has ever done that before!

Meanwhile, getting current, legal - and most importantly, safe - will keep me busy.