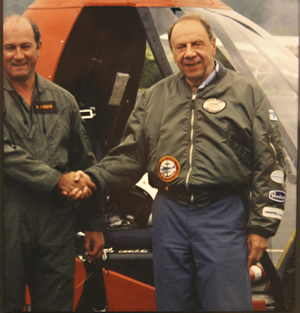 November 17, 2014 - Leonard Greene, the founder of Safe Flight Instrument Corp., and his son Randall, who is president and CEO of the company, were presented the 2014 Joseph T. Nall Safety Award in New York on Friday, November 14. The Nall Safety Award honors major contributions to aviation safety and is presented by the International Air & Transportation Safety Bar Association, an organization of lawyers who practice aviation law before the NTSB.

Leonard Greene is credited with inventing and perfecting the technology of stall warning. His leading edge flow measurement device - commonly called a stall vane - was Safe Flight’s first product when the company was founded in 1946. The Safe Flight stall warning system is the most manufactured aviation safety device in history and is used on hundreds of thousands of airplanes of all types around the world.

This past summer at Oshkosh, Safe Flight announced a leading edge vane angle of attack measurement and display system designed and priced for piston singles, both standard category and homebuilt. The company is about to receive FAA approval for simplified installation requirements of the system on a wide variety of airplanes.