We are now at day four of our thorough inspection of our newly acquired Bakeng Deuce, and it’s time to move forward into the engine compartment. For openers, it is not a good idea to take your pressure washer to the engine and engine compartment. Corrosion and other damage can be caused. The magnetos have vents and other tiny holes. A blast of water or soap solution just may finish one off. Wipe the engine and compartment down with rags. Use a little oil or Varsol if you must. But wipe the residue off as well.

Since ATA 70 of the Air Transport Association AT100 common numbering system (still often used for GA aircraft) starts at engine general and then cowlings, we did the same. The nose bowl contains part of the cooling baffle system. Each cooling inlet has a rubberized seal which prevents cooling air from leaking below the cylinder line. I had noticed that the CHT was around 350℉ in May. Both sides had these seals adrift. Looking inside the engine compartment and forward, it is easy to see the sheet metal flaps that retain those seals. It takes just a moment to position and retain them with a PK screw. 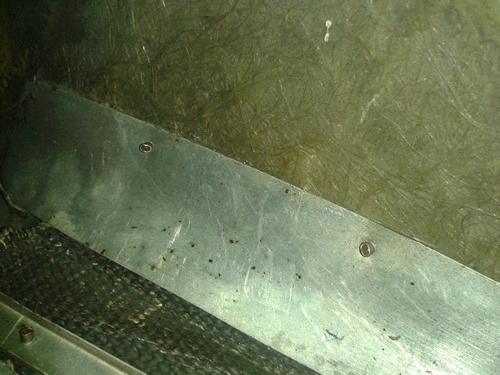 Speaking of cooling, I noticed that the magnetos are quite similar, but their installations are inverted. That would not be important here except that the Bendix mags have small D-shaped vent covers. These must face down to avoid moisture or debris from entering the mags. Because the mags are installed on the opposite side in opposite orientations, those D vents are opposite as well.

ATA 72 designates engine general. It is here we inspected the cases, accessory case, flywheel, and cylinders. The push rod tube seals were examined. The valve covers were retained by a small pile of No. 10 screws with slotted panheads. We noticed that all of them were a little loose, but the screws on the No. 1 cylinder were looser than the rest. That may account for the engine oil traces seen in the area. The push rod tubes were dry. While there, we used our stubby combination wrench set to wrench-check every accessible bolt in the compartment. Do thou likewise.

That goes for the firewall as well. There is a ground wire block on the firewall, with six wires total mounted on three studs. All those ground wires could be moved easily. Not so easy was getting a socket over the nuts to tighten them, but we did.

ATA 73 is engine fuel. We have already discussed fuel in the main fuel tank. Forward of the firewall, it’s another topic. Why? Fuel in the engine compartment is subject to cylinder cooling air. The cylinders run at about 350℉. Fuel in the engine compartment is subject to percolation, and if there is an exhaust gas leak, then lines can be damaged, leading to fire. This engine uses stainless braided lines. Percolation does not seem to be an issue since the line is far from the exhaust. Still, something told us that some fireproof sheathing over that line would be a good idea. This aircraft comes with a gascolator. We tested the fuel and found dirt. That justifies the practice of removing the bowl for cleaning (and cleaning the fuel screen as well). Is the gasket good or is it cracked? 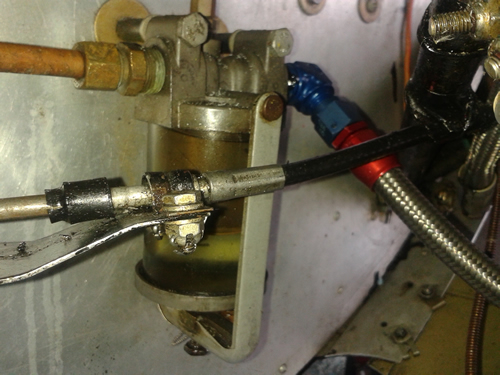 ATA 74 refers to engine electrical and magnetos. The idea is to loosen the spiral wrap enough so that you can wipe off any dirt and see for yourself the state of the wiring. Is the insulation chafed? It is very common for the generator wiring to have damaged insulation where it passes by the starter. We have seen it worn through to the copper wire. That was not the case here, but it pays to look. There are dozens of wires into the engine compartment. Inspect them all. Pay special attention to the generator/alternator wires. This engine has a battery relay as well as a starter relay.

Aircraft Spruce stocks terminal boots in various sizes to cover and protect the studs on those relays. A spark here could light quite a fire. A spray of fuel could cause an inferno. If you can’t obtain those boots, then employ the red RTV insulating tape. It’s the tape that stretches and sticks to itself. We will be installing some of that. Before you put it on, verify the connections are secure and show no resistance. A light film of petroleum jelly brushed on helps to prevent future corrosion. The battery terminals may be given the same treatment.

There are two relays in the engine compartment and several switches and just one circuit breaker in the cockpit. Inspect all the terminals and lugs on these components for tightness and for corrosion. Look for signs of overheated wiring; is any of it burned or blackened? Open up the spiral wrap and look inside. If it is burned, do ask yourself, “Why?”

Several friends noticed that the sense wire to the oil temperature bulb was soldered on and that the wire strands had broken over time. At this point only a few strands remained. We removed the solder, then adapted a female lug to fit snugly onto the T-lug. You probably know that vinyl tape has no place in the electrical system of your aircraft. However, there are types of tape that do. One of these is silicone or RTV tape. We installed about 8 inches of this tape over that sense connector to prevent shorts and to further retain it. It also provides some stiffness to the point where the wire joins the terminal.

ATA 75 is engine air. The only remarkable cooling air here is the oil cooler. In this case, it is sized to provide adequate cooling in hot weather. The oil may run a little cool in spring, but an air baffle may be employed.

Generally speaking, you want to avoid introducing fresh air into the cowlings below the cylinder baffle line. If you do, the cylinder cooling will be compromised. If you must bring air in, use a hose to bring it to the component and a hose to duct it overboard. This engine we’re inspecting is good in this respect.

It is in the interest of your engine to have the cylinder baffles sealed so tight that 100 percent of the cooling air must pass through the cylinder fins, having nowhere else to go.

In this installation, cooling appears to be perfect. The CHTs are exactly where they should be.