Wings for Science - Living the Dream

Imagine dreaming so big that you can make the greatest aviation adventure come to life. What would your personal dream be? Flying fighters? Providing medical services to remote locations? Your editor has always loved science, and perhaps it’s why this story has created such an impression.

With a friend, Dan Scopel, a Pipistrel Sinus pilot, we met a young couple at St. Hyacinthe airport recently; they happened to be on their honeymoon. They’re from France and how many of us could say that we looked for a floatplane on our honeymoon? They had flown across the ocean and were staying with friends in Montreal to enjoy being newly wed while discovering the delights of that beautiful city. The small airport at St. Hyacinthe has a long pond to the side of the runway to allow floatplanes to land and be pulled out, so there are several based there. What was their connection with floatplanes? Maybe it’s their next purchase, but why?

Okay, let’s get to the real story here. Adrien Normier and his bride, Clémentine Bacri, have been together for 10 years. They just got married. They love science and education and wanted to find a way to make a unique extended flying quest to support public science institutions that could augment their programs with some low-level flight data gathering. They bravely decided to put out a call to organizations worldwide, offering their services to do overflight surveys using whatever detection devices were required to fulfill the scientific goal. They received proposals from all corners of the globe and set up contracts to locate whales in the St. Lawrence, film birds, and do geologic surveys in deserts and around volcanoes all over the world while using a modified Pipistrel Virus in relatively slow flight. 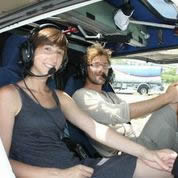 To embark on such a venture, they had to select the aircraft and make the required modifications. In particular, they had to extend the fuel range from 6 hours to 12. They installed a conduit in the wing and attachment points to allow cameras and other scientific instruments to be mounted and their data to be downloaded into the cabin.

Since their travels involved projects in almost every continent, they were able to find companies who were able to put their logos on the aircraft in exchange for sponsorship. They established a 14-month tour around the world which you can read about on their website.

It’s unusual to get permission to fly VFR over the Atlantic, but they did so, carrying out projects in Iceland and Greenland. 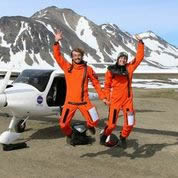 Then they flew to Canada to help locate and film whales to aid the research centre in the Mingan Islands in the Gulf of St. Lawrence. The research area is so massive that traveling by boat makes it really difficult to find and identify the whales. 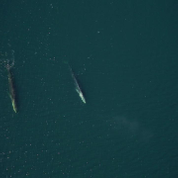 Spotting whales in the Gulf of St. Lawrence

Their travels around the world resulted in hundreds of hours of spectacular video footage, and much of it has been made into television films. The narration is expertly done by Clémentine, but of course it’s in French. It’s certain that you will enjoy the video and even recognize a few words of English if your French is not that good.

You can read more about their trip in an in-depth interview they did with the Phukett Gazett in Thailand.

They were really disappointed not to have made it to Oshkosh during their world tour and apparently so were their sponsors; but they hope to make it someday, perhaps in 2015. They have the date in their calendar. Let’s hope they can make it.

Adrien is a pilot for Air France, and Clémentine is a lawyer practising in France and Luxembourg. You can watch an English teaser video of their adventure along with many other videos on their YouTube site. On considering the purchase of a floatplane, Adrien confided that they might take the time in the coming winter to fly to Florida to work on a floatplane rating, and perhaps take in Sun ’n Fun while they are there.

Clém and Adrien are a delightful, smiling, and enthusiastic couple and it was a pleasure meeting them. It was inspiring to discover that two young people can dream big and follow those dreams all around the world in an aircraft most of us would consider lightweight for the challenge. They know better.

The slow flight capabilities made it an ideal aircraft for their projects. The only time they shipped the aircraft was to get it from Chile to Australia. One benefit of the Pipistrel family of aircraft is that their wings are readily removable. This fascinating couple are living proof that, as FDR said, “The only limit to our realization of tomorrow will be our doubts of today.”

If we dream big, we can do so much more with a small aircraft than going for that $100 hamburger.