Annual Inspection – The Bakeng Deuce, Part 6 (Final): On a Wing and a Prayer

Once you have the engine inspected, you can see the light at the end of the inspection tunnel.

There are four hand access panels in each wing, and the straps that enclose the joints of the left and right wings are to the center section. 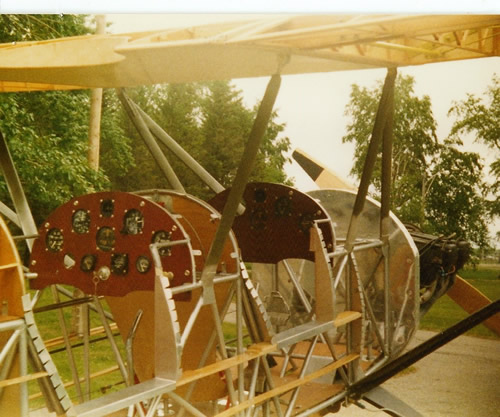 If you study the wing structure photo from 1982, the spruce and birch just look lovely. Well, they were lacquer painted, have been kept in hangars, and look at least as nice today as they did when new. We found not a blemish. As with inspection, generally we simply felt the wings, ribs, and spars from the outside for cracks, weakness, and the softness of rot. Our Pentax borescope snaked through the interior structure looking for cracks at attachments and the root end of the spars. We searched for broken or loose lacing and studied the brackets and plates from root to tip, looking for cracks, bends, and rust.

Despite it all, we found nothing structural to report. Finally we employed that plastic oil bottle with the telescopic straw to provide a drop of SAE 20 oil at every joint, fastener, clevis, and pin. Why should rust be allowed to start now?

An aircraft wing set on struts about 2 feet above the fuselage is called a parasol. Its advantages: 2 more feet of span, all of it lifting, and ease of removal. One man may remove the wings if he has some sawhorses. (Some women might manage it, too.)

In flight you do not need to lift one wing before you turn. You are already below the wing and aft of it. You see pretty well from a Deuce and it’s a lot of fun.

The maintenance side is that those struts (and there are lots of them) have bolts, clevis fittings, grease fittings, and lots of places wanting a drop of oil. None of them can be moved like an aileron. All one can do is feel for wear and play and rust. Finding none, we once again placed a drop of oil at each flying surface and bolt. The wing inspections were completed in about three hours.

The annual inspection was completed, and the parts that yielded snags were written down - and there are 18 pages of them.

The beautiful bird is ready for those snags to be fixed.

I have written this for several reasons. First, I want to say that beautiful paint and fabric may conceal what must be corrected. Second, finding one defect almost always means others are at hand. Find them and live to fly some more.