It’s Not Too Early

As you face the early snows and plan for the festivities, it’s okay to be looking forward to EAA AirVenture Oshkosh 2015. Tickets are already on sale, and your Canadian tent area next year needs a Canadian aircraft to showcase. Jill Oakes flew her Pietenpol in last year, and Becky Dueck flew the Manitoba 99s Cessna 150 - C-FLUG. Be aware that if you are going to offer your aircraft to display, you will have to be there for the whole week. Moving aircraft around the public grounds can be a nightmare, so the general rule is that the display areas are not allowed to move aircraft in and out through the week of the show. 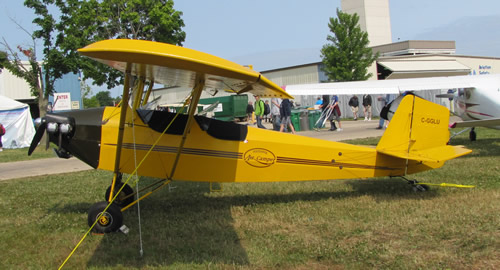 Canadian Council Chairman Jack Dueck nominated yours truly as a candidate for the council, and EAA Chairman Jack Pelton approved. It is such an honour to have been selected and I will serve my term energetically on your behalf. There are no hard boundaries on areas that council members serve, but logically, as the most easterly representative, I will be able to focus on serving those chapter members in Eastern Ontario, Quebec, and the Maritimes. Please contact me on any questions you might have.

We would like to encourage you to join EAA if you are not already a member. There are many benefits to joining, and the $40 (U.S.) membership fee is actually less in today’s money than the $10 fee in 1953! Sport Aviation magazine comes free every month to members, who also get to read it online if they choose to. You get free access to over 300 museums which alone could save more than $40.

Canada is underrepresented when compared to the United States if you look at the populations, and we certainly have a rich history of experimental aviation to be proud of. If you would like to join or renew, just go to this link and sign up. You can even save $4 by checking the box to automatically renew, which means you’ll get a new membership card in the mail every year, without having to think about it.

The Red Bull Air Race World Championship series for 2015 was announced recently, and there are two new venues – Chiba, Japan, and Sochi, Russia – as well as the return to the calendar for Budapest. The remaining five locations were also featured last year, and the season finale will be in Las Vegas in mid-October. Canada’s own Pete McLeod had a great season in 2014, and we wish him well for the upcoming series which kicks off February 13 to 14 in Abu Dhabi, United Arab Emirates.

As always, don’t forget to check out the great webinars this month. You may have already enjoyed Wally Anderson’s December 10 “Hints, Tricks, and Tips to Building a Van’s RV”, and you can attend Pat Webb’s “7 Habits of Highly Effective Chapters” on the 17th.

I would like to wish you all a happy holiday season, Christmas, or whatever you celebrate where you live! Safe flying.