EAA is proud to honor five new inductees into our Sport Aviation Halls of Fame at a dinner ceremony on November 10, 2016, in the Founders’ Wing of the EAA AirVenture Museum. The five inductees, representing ultralights, the International Aerobatic Club, Vintage Aircraft Association, Warbirds of America, and homebuilding, have dedicated their lives to their respective areas of aviation and join an esteemed group of individuals who represent the spirit of EAA in the highest form. 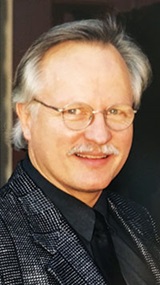 Tracy Knauss, longtime publisher of Glider Rider, which became Light Sport and Ultralight Flying magazine, has helped knit together the small community of hang glider and ultralight pilots with the publication he started in 1976. Photographer, artist, space buff, photo restorer, genealogist, magician, husband, and father — the list of Tracy’s roles is long and varied, but the one that started him down the path to international recognition was magazine publisher.

When Tracy discovered hang gliding in 1976, he saw the need for a publication that informed pilots about news, warnings, new products, flying tips, and, yes, even gossip. He formed a company called Glider Rider and started a magazine by the same name. It was immediately successful, and quickly became the go-to publication for hang glider pilots in the United States as well as in more than 60 other countries. “There is a commonality in flying that transcends language differences,” Tracy observed.

As the sport evolved and pilots started putting engines on their hang gliders, Tracy followed the trend, changing the magazine’s title to Ultralight Flying, and began including coverage of motorized ultralights. In its 40th year of publication, and now titled Light Sport and Ultralight Flying, the magazine covered hang gliders and ultralights of all kinds, both powered and unpowered. 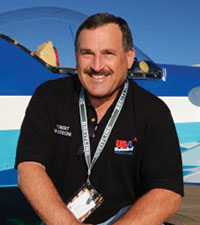 Robert “blames” his aviation career on his junior high school, which was located right next to an airport, providing ample opportunity to gaze longingly at the airplanes through the window. He soon began swapping manual labor and airplane washings for flying time. Robert obtained his private pilot certificate before his senior year and received his A&P certificate the summer after graduation.

Robert built an S-1C Pitts Special and flew it first to Oshkosh, then down to Fond du Lac, Wisconsin, for his first aerobatic contest. Robert was the highest-scoring first-time competitor in Sportsman, and he counts that trophy as one of his most cherished. From that first contest at Fond du Lac, Robert met many fellow aerobatic enthusiasts involved in the IAC, finding them to be a helpful and friendly group of people. From then he was hooked and never wanted to leave. In 1988 Robert competed in the U.S. Nationals for the first time, winning second overall. Robert later began flying the CAP 231 and in his aerobatic career has flown in a total of 10 World Aerobatic Championships.

Robert has logged more than 17,000 hours of flight time, more than 5,000 of those in general aviation. This includes 1,600 hours of aerobatic time. The list of aircraft types he has flown exceeds 80. Robert is a retired airline pilot, having flown the 717 for 12 years at AirTran, and today flies a Citation XLS for a local company, allowing him the benefit of flying out of the same airport for both work and play. 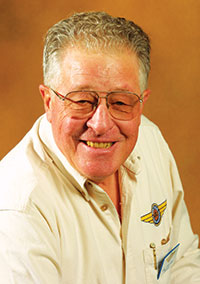 Phil Coulson of Lawton, Michigan, has been immersed in aviation for all of his adult life. Phil enlisted in the U.S. Air Force during the Korean War and, on his return to Michigan, learned to fly in a prewar Piper J-5 Cruiser. Phil had discovered a passion for sport aviation, and began attending the early EAA conventions at Rockford starting in 1962.

Phil began volunteering with EAA at Rockford, and then at Oshkosh, where he became an advisor in the Antique/Classic Division in 1985, followed by election to its board in 1987. During this period, Phil acquired a Waco UPF-7 open-cockpit biplane. The experience of owning the Waco, and the camaraderie with other owners that followed, led Phil and his friends to organize the American Waco Club (AWC) in 1993. Phil was named the founding president, a leadership position he continued until his retirement in 2013.

Phil also edited and published the Waco World News, the publication of the AWC. In addition to the UPF-7, Phil and his wife, Ruthie, have owned a G35 Bonanza, a Cessna 190, a Waco INF, a Waco 10, and a rare Waco UBA.

As a director of the Vintage Aircraft Association, Phil has chaired the annual Vintage Parade of Flight during EAA AirVenture Oshkosh and served as a long-term senior judge in the Antique category. Phil chose to take emeritus status with the VAA board in the fall of 2015 after nearly 30 years of active, involved, and dedicated service to both EAA and the VAA. 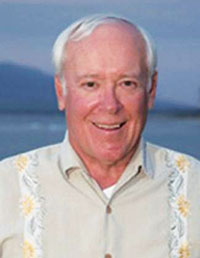 Doug Champlin dedicated his life to the historic preservation of military fighter aircraft, including 27 examples from World War I, World War II, Korea, and Vietnam. All of these aircraft were maintained in flyable condition and represented combat pilots from the United States, the United Kingdom, Russia, France, Japan, and Germany. The aircraft were based at the Champlin Fighter Museum in Mesa, Arizona, from 1980 through 2002. His museum didn’t just house aircraft, but also featured a staggering collection of other artifacts, including an armored car, a Soviet T-34 tank, and a large number of other weapons, including a Gatling gun. In addition, Doug maintained what was considered to be one of the world’s largest collections of autographs from famous fighter aces throughout history. The museum was also home to two notable veterans’ groups: the American Fighter Aces Association and the Flying Tiger Association.

The Museum of Flight in Seattle, Washington, is now honored to be the permanent home of the Champlin Collection, proudly displaying Doug’s treasured airplanes throughout their Personal Courage Wing gallery. Doug was a member of the Museum of Flight’s board of trustees, and was gratified to see his collection remain intact when it was acquired by the museum and put on display in 2004.

Over the years, as he devoted his life to the acquisition, restoration, and display of so many rare and historic aircraft, for Doug, the most rewarding thing was the opportunity to meet fighter pilots from around the world and hear their stories firsthand. Those meetings led to many long-term friendships that he cherished until he passed away in May of 2013. 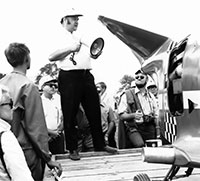 Jim Bede, an Ohio native, made his first foray into the experimental aviation world with his original BD-1. The airplane had a number of innovative features including the use of bonding the aluminum structure instead of riveting. The rights to that airplane were eventually bought by the Grumman Aircraft Company and became the Grumman Yankee. Jim followed that design with the record-breaking BD-2, and then the iconic BD-4. The simple and innovative design features of the BD-4 set the standard for simplicity and excellent performance. It was the first homebuilt aircraft to be offered in kit form, requiring no welding by the builder.

In 1971 Jim started the aviation world buzzing with the introduction of the BD-5 Micro. After the first flight, stability issues required a redesign, and Jim hired Burt Rutan to head the flight test department. One of the challenges faced by the BD-5 was the choice of engine. While searching for a reliable piston powerplant for the BD-5, Jim decided to create a jet-powered version. The BD-5J, best known for its role in the opening scenes of the James Bond film Octopussy, was a 300 mph manned bullet powered by a Sermel TRS-18-046 turbojet.

Jim was an active member of Chapter 1252, and there was no doubt about his passion for aircraft design. He devoted his life to helping people who had the dream of building and flying their own airplane. To those members in Chapter 1252, he was a mentor, a friend, a father figure, and a crazy old guy who loved to tell jokes. Jim passed away on July 9, 2015.