Pilot’s Bill of Rights 2: Where Does It Stand?

September 30, 2015 - Last week’s announcement by Sen. James Inhofe (R-Oklahoma), the author of the Pilot’s Bill of Rights 2, about modifications to the bill’s language have raised plenty of questions among EAA and AOPA members.

We’ll be up front with you: EAA and AOPA fully support Pilot’s Bill of Rights 2 including these modifications. For more than 25 years, our two organizations have been pushing for aeromedical reform. Our most recent exemption request was made in 2012 and was much less expansive than the bill as it now stands, but it did not gain the traction needed for approval. We are further along the road to substantive aeromedical reform than at any time in history.

We’ve also been digging after answers on some of your most common questions, which include:

Why the changes in the bill’s language?

Simply put, the original language of the Pilot’s Bill of Rights 2 did not have enough support in the Senate, despite your thousands of contacts with your senators.  It was not going to pass or move forward in its original form. Inhofe knows the workings of the Senate extremely well, so he looked for a way to get support to move meaningful reform forward. They went directly after the objections voiced by fellow senators, and in doing so built bipartisan support from 67 senators across the entire political spectrum.

What if I will only support the original language in the bill?

Again, we’re going to be frank here. Accepting only the original Pilot’s Bill of Rights 2 language would mean failure of the entire bill. We would end up with nothing, the same way previous efforts for meaningful aeromedical reform have ended.

Will this affect me if I still want to fly as a sport pilot?

No. This bill does not change any provision of the sport pilot rule. You may still fly light-sport eligible aircraft with at least a sport pilot certificate and a valid driver’s license in lieu of a third-class medical certificate.

Isn’t the requirement to have had a medical certificate within the past 10 years only a move to a 10-year renewal of a medical?

No. If you are a private pilot and have a valid medical certificate (regular or special issuance) within 10 years from the date when the bill is signed into law, you may never have to visit an AME again. You will simply have to take an online medical education course every two years, and visit your personal physician once every four years and note that visit in your logbook. No requirement will exist to report the outcome of the visit to the FAA.

Even though I have held a special issuance within the past 10 years, I understand that I may have to get another if I have been diagnosed with certain conditions. What conditions are those?

Those conditions are described in the FARs and are limited to an established medical history of the following:

Neurological: epilepsy; a transient loss of control of the nervous system; and disturbances of consciousness without satisfactory medical explanation of the cause.

Psychological: personality disorder that is severe enough to have repeatedly manifested itself by overt acts; manifested or may reasonably expected to manifest delusions, hallucinations, grossly bizarre or disorganized behavior, or other commonly accepted symptoms of psychosis; severe bipolar disorder; and substance dependence within the previous 2 years as defined in FAR 67.307(4).


What is this online aeromedical course and who will administer it?

The online aeromedical course, taken once every two years, would be a requirement to keep your flying privileges. It would be free of charge to all pilots, whether or not they are AOPA or EAA members. We believe education is more effective than regulation, and this is the best way to get the important health information to everyone. It would also include information on how over-the-counter medications can affect our fitness for flying. The course will be run and maintained through the GA community’s communications channels, such as AOPA’s Air Safety Institute. The FAA would only approve the content of the online course. If we as a flying community fail to show that we can be responsible for educating ourselves, more regulation will be put upon us.

I feel fine. Why do I have to go to a doctor every four years to prove it?

We’re pleased that you feel fine, but even if you weren’t a pilot, avoiding the doctor’s office isn’t the way to assure that you’re in good health. Most people see their personal physician for a physical every year or two regardless. This legislation eliminates the cost, paperwork, and extra hassle of regularly seeing a different doctor just to fly. It also eliminates many of the burdens placed on private pilots just because they’re pilots.

Will this help me if I need a special issuance?

Yes! One of the biggest problems with the current special issuance process is that it’s a continual renewal, with all the cost, paperwork, and hassle associated with it each time. Under the bill’s language, you receive the third-class medical special issuance once and you’re good to go, with only future visits to your personal physician at least every 48 months. In addition, the bill requires the FAA to streamline its special issuance process, so even that one time might not be as much of a burden in the future.

I’ve heard that the FAA denies most special issuance medical requests, so I’m reluctant to even try.

Whoever told you this is wrong. The FAA issues medical certificates to the vast majority — more than 98 percent, in fact — of people who complete the medical certification process. That includes those who are seeking a special issuance medical. And, under the Pilot’s Bill of Rights 2, you will only need to complete the special issuance process once.

Doesn’t this just help old pilots? What about new private pilots who can’t get a third-class medical?

Inhofe heard clearly from fellow senators that in order to support the bill, they needed one initial medical approval by the FAA to ensure that a new pilot was in sufficiently good health to fly. That’s a one-time approval, compared to the biennial medical exam — sometimes more if certain conditions are involved —that is now required. That’s a pretty substantial step forward for everyone.

Will I be able to get insurance if I fly under the rules set out in the Pilot’s Bill of Rights 2?

Insurance companies have not yet addressed how they will handle medical reforms and are unlikely to do so until medical reform becomes law. Our 10 years of experience with the sport pilot regulations and other pilots flying sport pilot eligible aircraft without a medical certificate showed little or no impact on insurance availability or rates. Since each company uses slightly different language regarding medical requirements, the best thing to do is to contact your insurance broker or company and ask how they will handle anticipated reforms. History indicates that compliance with the applicable regulations is typically all that is required by insurance companies, and the new regulations would not require an additional medical certificate for many pilots in the future.

So, where do we go next? What’s the timeline?

Even with all the progress, there’s still work to do. Few things move forward quickly in Congress. Inhofe would love to get more senators on board as co-sponsors — so, if your senator is on the list of those still not signed on, continue to contact them. Inhofe is also working to get the bill to the Senate floor. If approved there, it would move to the House, where nearly 150 representatives are co-signers of the original parallel Pilot’s Bill of Rights 2. We are seeking every potential avenue for progress in both houses of Congress.

Predicting the pace of legislation is a fool’s game, but we’ll say it again: This needed reform is further along now than ever before and we are working daily to get this done as soon as possible. It has support of GA groups, aeromedical groups, and several large airline pilot groups. Everybody would love it to move faster, but discouragement and doubt do not help. Let’s push this across the finish line! 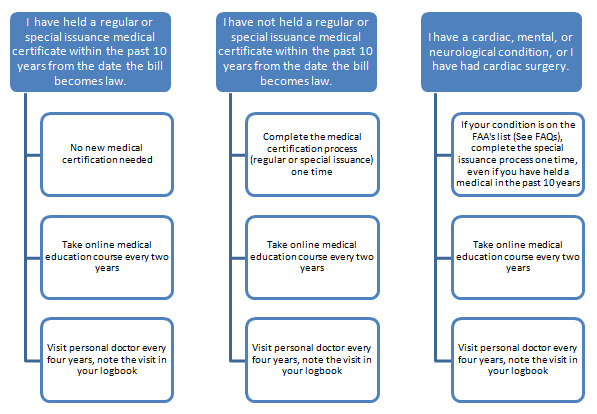