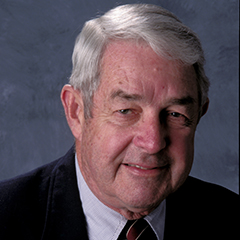 December 7, 2017 - Memorial services for James Brown, a member of the EAA Aviation Foundation from 1996-2004 who was also an aviation industry leader for many years, will be held on Saturday, December 16, in Hunting Valley, Ohio. Brown died on November 20 at the age of 84.

James, EAA 390248, was perhaps best known as president of Hartzell Propeller Inc., the world’s oldest propeller company, but also enjoyed a distinguished business career prior to that position. He was also a carrier-rated naval aviator who continued his love of aviation throughout his life. Along with his term on the EAA foundation board, he was also a member of the General Aviation Manufacturers Association board of directors.

He is survived by his wife, Constance, and six children including his son, Joe, who now leads Hartzell and is a current member of the EAA board.