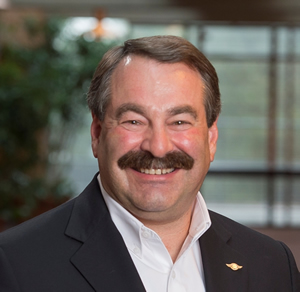 January 7, 2015 - Mark Van Tine, chief executive officer of Jeppesen and vice president of digital aviation for The Boeing Company, has joined EAA’s top leadership as the newest member of its board of directors.

Van Tine, EAA 398757, was invited to join the board during the group’s fall meeting at Oshkosh, Wisconsin. As a Class III director for EAA, he will serve a one-year renewable term on the EAA board.

“Mark Van Tine is a longtime EAA member who has a personal commitment to recreational aviation in all its forms, as well as strong aviation industry leadership experience,” said Jack Pelton, EAA chairman of the board. “We are grateful that he has stepped forward to represent our membership and help lead the association as we pursue our mission of growing participation in aviation.”

Along with bringing his aviation industry experience to the EAA board, Van Tine is committed to building personal aviation for future generations. He has been an EAA Young Eagles pilot for nearly a decade and has personal involvement in the Build A Plane program that encourages interest in science, technology, math, and engineering for young people.

Van Tine owns and flies a Glasair Sportsman he and eight high school students built in 2013. He has also dedicated his time and efforts to such benefit programs as Challenge Air for Kids, Colorado UPLIFT youth service organization, and the Wingspan Campaign Committee for Wings Over the Rockies Museum. While in college, Van Tine built fuselage kits for Barracuda and Falco homebuilt aircraft.

Van Tine has been Jeppesen’s CEO since 2002 and became the leader of Boeing’s digital aviation organization in October 2012. He has experience in flight operations, customer service, navigation, and information technology. Van Tine is also a member of the General Aviation Manufacturers Association (GAMA) board of directors.

Van Tine earned his bachelor’s degree in aviation from San Jose State University and has attended the Harvard School of Business program for management development.