The team has been making steady progress on restoring the F86 Sabre that has stood guard over the Royal Canadian Air Force Memorial in Sarnia, Ontario’s Germain Park for many years. When we last spoke, the new aluminum panels were being fabricated. The work is being done much like we do in the construction of our Van’s RV kits: cleco, drill, deburr, rivet. 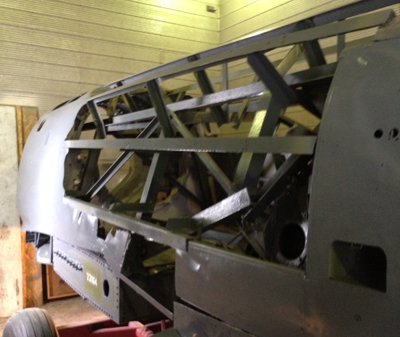 Painted and ready for skins

Each new panel was fitted in place and then drilled for clecos. Each subsequent panel was fabricated and clecoed on, until we had replaced just over 240 square feet of surface skin. The canopy was placed on top and using pictures from Dave O’Malley at Vintage Wings and measurements from manuals, etc., was clecoed in place. The cockpit area was damaged in a warehouse fire in 1970, and some of the remaining fire damage is evident. 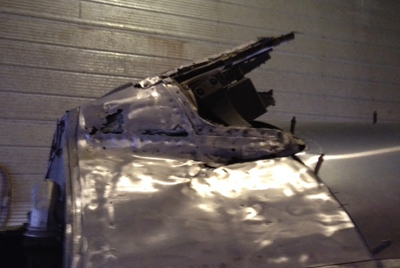 Since the original restoration left a good portion of the burn damage in place, albeit covered, we did not want to alter that. It was decided to keep as much in place as possible, as this was part of her history - for the same reason we used pulled rivets where there had been pulled rivets and flush rivets elsewhere. 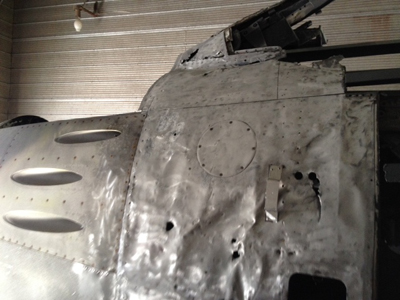 Buckled side from the fire

Once the canopy was in its proper place, a new windshield was fabricated. Again, the pictures show what was left of the original and what we had to work with. The new windshield is fabricated from aluminum, since we would be painting the canopy with a UV-stabilized silver. So using Plexiglas was not needed. With the windshield done and canopy fitted, etc., it was time to take everything off and back prime and prime all those parts…but first deburring and final drilling for rivets took place. 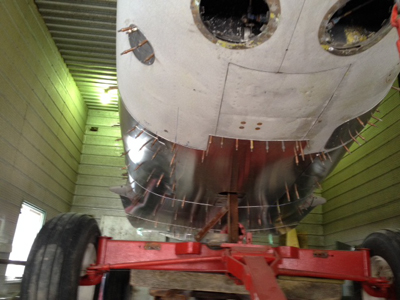 The panels were all washed, degreased, and surface-prepped, as was the fuselage. At last we were ready for primer. One of the major paint companies supplied primer and we used it. It looked great for a day, and then we started to notice the primer peeling off - literally. This had us stumped, so we had a paint rep come out and look at the problem. The problem turned out to be the primer and not our process.

At this time, BASF stepped up and said it would supply the paint we needed for the whole project. So to make a painful story short, the fuselage was again prepped for primer and the new BASF epoxy primer used. “Wow” is all I can say. The stuff is amazing and sticks like glue. We had to abrade the stuff off for some mods we made and that was a chore. 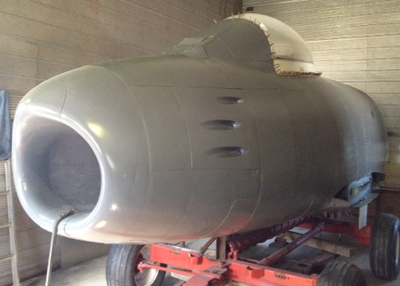 All the new skins were primed on both sides as was the fuselage. The canopy and windshield parts were primed as well. When the parts were dry and cured, the panels were all clecoed back on in their proper place and riveted. Over 1,850 1/8-inch stainless pulled rivets were used. Once these were driven, they were all primed as well, and then a sanding primer was applied to everything.

The fuselage areas that would receive the silver and flat black paint were then sanded and cleaned. The windshield itself was masked along with the canopy and both were shot with the silver/clear coat that BASF supplied. I have to mention as well that at this time the BASF rep lent us a SATA gravity HVLP spray gun with digital pressure control to use to apply the colour coats. This gun made applying the silver metallic a dream. The spray pattern control was unbelievable. The front air intake area also was painted silver. Once we finished this, the fuselage was then masked for her flat black anti-glare shield and windshield trim. 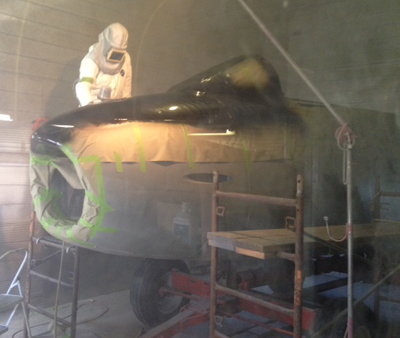 Painting with that wonderful gun

This was also BASF-supplied and was wonderful to work with. I have included pictures of the windshield area after we painted it. You can also see the finished product, less her final gold coat, as she was pulled out of the shop and taken to storage at our local airport, Sarnia Chris Hadfield Airport (CYZR). 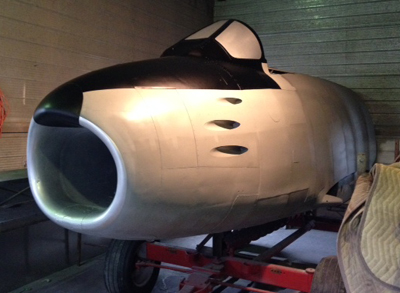 This is how it turned out.

Her custom transport wagon has made moving the fuselage about a nonissue. Once the fuselage left the shop, the tail section came in and work was started on it immediately. That’s where we stand today. 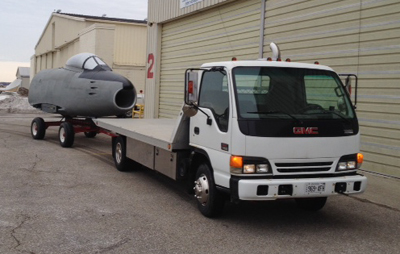 Towing the finished fuselage to the airport

The Sabre will be reassembled when the tail is done and primed. It will then receive its beautiful gold coat and Golden Hawk striping, etc. The Golden Hawk will be restored to her 1959 paint scheme, the first year for the Golden Hawk Team. Dan Dempsey’s book, A Tradition of Excellence, has been a great resource for us, as has Dan - a former Snowbird pilot.

Sarnia’s Golden Hawk No. 23164 will be dedicated to S/L Jim McCombe and his two crew chiefs. Their names will appear on the cockpit sides. S/L McCombe was the second Golden Hawks team leader and took over from Fern Villeneuve. Fern’s name is on the side of Vintage Wings Hawk One, the flying tribute to the Golden Hawks Team. When 23164 is placed back on her pedestal above the RCAF Memorial and rededicated, she will also take on the added responsibility of representing the whole Golden Hawks Team - pilots, officers, and crew chiefs. She will of course continue to represent all the RCAF veterans past and present as she had before. Vintage Wings Hawk One was a former Golden Hawk Team member.

The hope is to have Hawk One fly over 23164 during her rededication - two teammates reunited. Just think how different the lives of each of these aircraft have been since 1959 and the odds of them meeting again after all this time. The restoration team also has been encouraged greatly, knowing that Commander Chris Hadfield has been following our progress. It has been the gelling of our 15 or so members into a team that’s not afraid to tackle anything on this project; that has been the most amazing and rewarding part of this job. This is something that EAA figured out a long time ago. Using our new skills to honor our veterans in this way is the icing on the cake.

We like to have fun on this project as well. There were lots of gawkers when we pulled that fuselage between farms using the little Wheel Horse tractor.

Another ‘Mossie’ Takes Flight in Canada

Edmundston Lancaster Crumbling Away After 50 Years

Dallas Executive Airport Is New Home of the CAF

'Once in a Lanc Time'