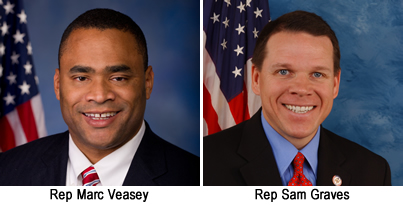 “We appreciate representatives Graves and Veasey stepping forward to lead this important caucus, especially with important general aviation issues ranging from medical certification reform to FAA reauthorization ahead in this session,” said Doug Macnair, EAA’s vice president of government relations. “It’s essential to have members of Congress who are aware of these aviation issues and in contact with organizations such as EAA to maintain the rights and privileges we have as aviators.”

As co-chairs, Graves and Veasey will work to recruit members to the caucus and provide leadership as they work to inform their House colleagues about GA’s important contributions to the nation's economy and transportation system.

“General aviation is not just about flying planes; it’s about creating good-paying jobs and economic opportunity, not only in states like Missouri and Texas, but all across the country,” said Graves, who is a pilot, EAA member and annual attendee at EAA AirVenture Oshkosh. “I look forward to working with members of the caucus, as well as our counterparts in the Senate, to ensure that we maintain and strengthen this vital industry.”

Rep. Veasey was first elected to Congress in 2012 and currently serves Texas’ 33rd District, which includes Dallas and Fort Worth.

“I am very proud to join the House General Aviation Caucus as co-chairman and look forward to working with Congressman Graves to advance public knowledge and awareness about how important general aviation is to our economy and industrial base, totaling a more than $14 billion impact in Texas and over $150 billion nationally,” he said. “Serving as co-chair of this caucus is a great honor and I look forward to working with our members and affiliated industries to help reinforce the robust aviation legacy that many states across our country are so proud of.”