March 16, 2017 - In honor of International Women’s Day, EAA Chapter 812 in Ocala, Florida, participated in a very special Young Eagles rally specifically for girls. The rally, held March 11, was part of a Women of Aviation Week event, an initiative of the Institute for Women of Aviation Worldwide (iWOAW), organized locally by CarolAnn Garratt, EAA 58437.

“I was invited to be a speaker four years ago at one of these [Women of Aviation Week] events in Canada and was convinced that this was the way to get girls interested in aviation,” Garratt said. “Since then, I have teamed with EAA Chapter 812 to run this event.”

According to Chapter 812 Young Eagles Coordinator Warren Levin, participants in the Girls Fly event are given a Young Eagles ride, ground school, and a tour of the airport’s air traffic control tower. The day finishes with a career session.

“The career session really seems to be a big hit with the girls and their parents,” Garratt said. “This year, one girl signed up with the local flight school immediately after our session finished.” 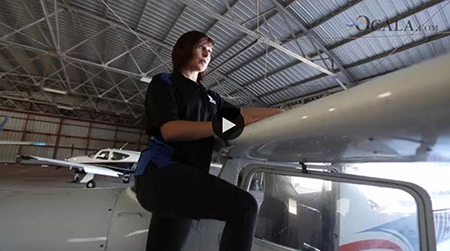 Only about six percent of pilots are female and Garratt said getting girls involved in aviation is important to increase the number of pilots worldwide.

“One of the things that convinced me, back in 2014 when I attended the first event, was what I learned about how girls learn and do things,” Garratt said. “They tend to learn and participate in groups. If one or two girls participate in a ‘normal’ Young Eagles event, usually with 20 or more boys and six or seven male pilots, they realize immediately that this is a ‘guy’ thing. We take a day to show them that this is a ‘girl’ thing. It gets them excited and interested.”

This year’s Girls Fly drew in 23 young women from the Ocala area and Levin said drawing a large group is typical for all of the chapter’s Young Eagles rallies. Next year, Girls Fly will be held on March 10.