November 19, 2015 - I’ve always had a deep appreciation for the passion of those I’ve encountered during my time at EAA, and I’ve always wanted to see it in action outside of the walls of EAA headquarters. Last weekend I got a taste of it at Chapter 838's Young Eagles Rally in Racine, Wisconsin. I had a day of firsts, from my first experimental aircraft airplane ride (my only others were the Ford Tri-Motor and a T-6 - I’ve been spoiled) to seeing the awe on a child’s face during his/her first flight to the dedication of chapter members who keep the spirit of aviation alive through their grass roots efforts. 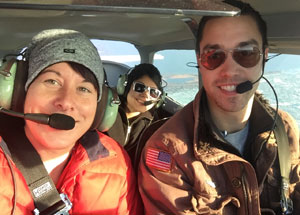 Three of us took off from KOSH Saturday morning, with me sitting right seat, Kyle Voltz at the wheel, and Nicole Rayos as my marketing travel partner. It was a crystal clear, cool, beautiful day. Perfect flying weather and we could easily see beyond 50 miles. This Charles Lindbergh quote sums up what I see when I’m up in the air but cannot put into words: “Sometimes, flying feels too God-like to be attained by man. Sometimes, the world from above seems too beautiful, too wonderful, too distant for human eyes to see.”

When we arrived in Racine, I didn’t expect to see such a fascinating chapter. Carl Bumpurs, EAA 263580, welcomed us and took us on a tour. They had a hangar that doubles as a museum and display area, a classroom where they teach a short ground school to Young Eagles, a flight simulator area, an airplane workshop free to members, unique fundraisers to keep things going, and youth programs for kids of every age to keep them engaged as they grow. The chapter owns 6-8 planes built by members and have 2-4 being built, including a Sonex being built by a 94-year-old.

I met a few kids in various stages of their youth programs. The first Young Eagle flight I rode on was with Owen Andreasen, age 12, who is in the Aviation Explorer Club. This program helps fuel the initial spark and keep interest alive after a Young Eagles flight.

Once a child reaches age 14, they can move on to the Aviation Explorer Post program, which is chartered with the Boy Scouts of America, and sponsored by Chapter 838. These chapter members hope to grow their participation in aviation long term by offering youth the critical opportunities to learn about aviation, along with related science, technology, engineering, and math. The Explorers meet twice per month and volunteer at AirVenture. This is truly a step from a Young Eagle flight towards learning to fly.

Additionally the chapter offers a special Young Aviators class in June for kids ages 14-18, where they learn building methods and hands-on flying with CFIs.

An example of that youth education paying off was Nick Fisher, EAA 850932, with whom I chatted after my Young Eagles flights. Nick joined the Explorer Post program in 2006, and is now a chapter and board of directors member. He volunteers his time at the chapter three times per month and ran their largest fundraiser this year. He’s now going to school for air traffic control and is saving up for his private pilot’s certificate. Nick is a perfect example of the success of EAA’s mission, growing participation in aviation, and the important role EAA chapters play in helping us carry that out. 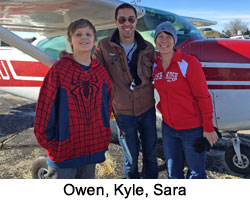 I got to enjoy two Young Eagles flights with three kids. Owen is an experienced Young Eagle who is an EAA Student member and is involved in the chapter’s Aviation Explorer Club. His interest blossomed from a plane he saw in the sky. His Grandma and he saw a sign about Young Eagles on Racine’s airport gate two years ago, and he just had to know what it was about. He’s been coming ever since then and attends most all of Chapter 838’s rallies each month. He wants to learn how to fly someday and his favorite part of the flights is taking control of the wheel. Kyle, asked him if he could fly anything, what would it be? He said “one of those pusher planes, like Cozy.” He can’t wait until he’s 14 so he can become a member of the Aviation Explorer Post. We hope he gets to achieve all his aviation dreams and more!