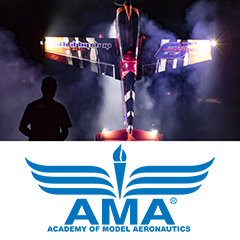 The Academy of Model Aeronautics (AMA) is the world's largest model aviation association, representing a membership of more than 200,000 from every walk of life, income level and age group. Like EAA, it is a non-profit organization open to anyone interested in aviation, specifically model aviation.


About the Academy of Model Aeronautics

Founded in 1936, the AMA is the official national body for model aviation in the United States. AMA is a self-supporting, non-profit organization whose purpose is to promote development of model aviation as a recognized sport and worthwhile recreation activity. AMA sanctions more than 2,000 model competitions throughout the country each year, and certifies official model flying records on a national and international level. AMA is also the organizer of the annual National Aeromodeling Championships, the world's largest model airplane competition. With more than 2,500 model airplane clubs across the country, AMA offers its chartered clubs official contest sanction, insurance, and assistance in getting and keeping flying sites. The voice of its membership, providing liaison with the Federal Aviation Administration, the Federal Communications Commission, and other government agencies through our national headquarters in Muncie, Indiana. AMA also works with local governments, zoning boards, and parks departments to promote the interests of local chartered clubs.

What are model aircraft?

A model aircraft is a small sized unmanned aircraft or, in the case of a scale model, a replica of an existing or imaginary aircraft. Model aircraft are divided into two basic groups: flying and non-flying. Non-flying models are also termed static, display, or shelf models. Flying models range from simple toy gliders made of card stock or foam polystyrene to powered scale models made from materials such as balsa wood, bamboo, plastic, styrofoam, carbon fiber, or fiberglass and are skinned with tissue paper or mylar covering. Some can be very large, especially when used to research the flight properties of a proposed full scale design.