Kudos to Young Eagles from Sporty's 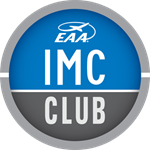 As part of the IMC Club's integration into EAA, the organization has launched a new and improved SAFEBOOK, a directory to help connect pilots with others who are IFR-rated and are looking for safety pilots. Connecting pilots to one another and allowing for the exchange of experiences can help improve safety in actual IMC conditions. Pilots who are willing to fly with others as a safety pilot can submit their name to the database, those who are looking for a safety pilot can search the directory based on location. Since it was first introduced in 2010, SAFEBOOK has been one of the most popular benefits taken advantage of by IMC Club members.

Gene Chase, a longtime editor of Vintage Airplane magazine and later a member of the Vintage Aircraft Association board of directors, died Monday, January 2, in Tulsa, Oklahoma, at age 92. His death comes less than two months after the passing of his wife of 70 years, Dorothy. Full story >>

The International Cessna 190/195 Foundation now has scholarships available for current or future aviators "for the purpose of instruction or training to improve or develop the individual's capabilities in the field of aviation, aeronautics, or astronautics."

The deadline for the scholarships is May 1, and anyone interested must fully complete an application form.

Kudos to Young Eagles from Sporty's

Sporty's had high praise for the Young Eagles program in its annual trend report, which highlights the 10 hot topics in aviation for the past year.

EAA works with the Sporty's Foundation in support of the Young Eagles program, which passed 2 million kids flown in 2016 as the largest youth aviation education program ever created. Since 2009, more than 40,000 Young Eagles have enrolled in Sporty's Learn To Fly online courses, which are offered free of charge to young people who have flown as part of EAA's program.

EAA appreciates more than a decade of Sporty's support for the Young Eagles program, which celebrates its 25th anniversary in 2017. Look for plenty of updates and special activities this year to commemorate a quarter-century of EAA volunteers building the future of aviation!
To provide a better user experience, EAA uses cookies. To review EAA's data privacy policy or adjust your privacy settings please visit: Data and Privacy Policy.