January 2017 - Soren Christiansen, John Madder, Ralph Inkster, Doug Robertson, and I participated in an Careers in Aviation Night hosted by 604 Squadron at Mewata Armouries in Calgary. It was the first time this event was held, and we learned about it less than two weeks prior. Although there’s room for improvement, it was a wonderful first run. 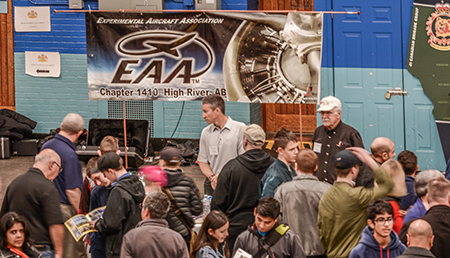 Here’s what the organizer stated.

“Good morning to everyone who helped make the Careers in Aviation Night such a success? The feedback was fantastic!

“We had over 100 kids come from nine different Air Cadet squadrons, including Airdrie. Add their parents and friends into the mix, and we estimate there were 200 people mingling on the parade square with you.”

A special guest appearance was made by Capt. Doug Eaglesham, which sincerely made my day. As he said, “Mentoring is a way of passing on knowledge, helping people achieve their goals, and strengthening our communities. It’s something that we all should be doing a lot more of. We all have knowledge that we can share. I think everyone did a great job of doing just that.”

Eagle sham is also an active member of our EAA Chapter 1410 and runs our Young Eagles program. He has also been honoured with the Order of Excellence by the province of Alberta. 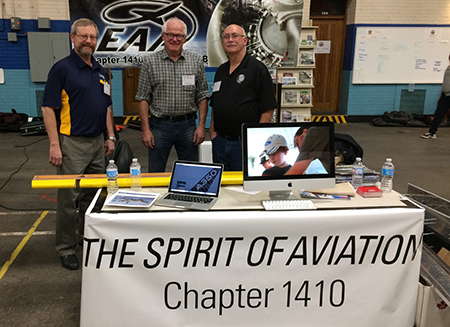 John Madder, Soren Christiansen, and Ralph Inkster pause for a photo after a busy evening.

At the event we were working continuously; we spoke about EAA, Young Eagles, and AirVenture. We had an RV fuel tank under construction and a wooden aileron with some fabric removed for display. We also had AirVenture videos and a large stack of Sport Aviation magazines. We handed out all of the magazines to kids to read and enjoy. Cadets were interested in us, and their parents were interested in us. We even spoke with some of the other exhibitors, and they spoke about joining EAA or renewing their EAA memberships. Many of the families recognized our chapter from hosting the B-17 this summer. We answered questions and we asked questions. It was a great event for such short notice, and we’re making plans to improve at future events.