When to restart your checklist!

January 2017 - It is fair to say that there is more risk in flying an aircraft that you built or modified than, say, watching a game on TV. Generally we work hard to mitigate any risk by the use of checklists. Those lists are meant to cover any eventualities that may arise, but one specific risk is in making any changes after the list is complete. I thought I’d report a potential problem that I encountered recently, in the hope that I’m not the only one who can learn from the error.

Having backtracked the runway, I took off in full confidence that everything was as it should be. But on the climb-out I found that I could not push the nose down, because the stick was jamming against something! There was no real risk since the climb could just continue while the problem was sorted out, but what could be causing the stick to jam when it had been clear during the run-up checks?

After backtracking the runway I had noticed that the sun was on my iPad screen, so I adjusted the position just a tad to get better visibility. That “tad” was just enough for the passenger-side control stick to come into contact with the bottom of the iPad mount! Lesson learned. The problem was quickly resolved, but did cause a moment of consternation. 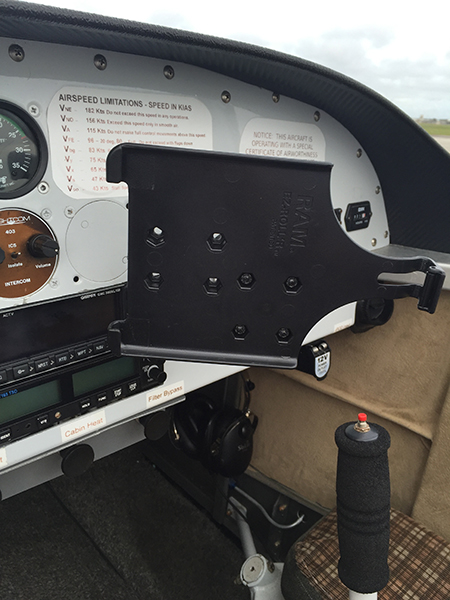 See how this can happen?

Here is a much worse example of what can happen if you make ANY modifications that might impinge on the flight controls after your checklists are complete. The pilot of a Thorpe T-18 survived, but his aircraft was seriously damaged after having adjusted his seat position and prevented a full range of motion of his control stick. Unable to climb out, the pilot eventually ran out of runway and flipped the aircraft. You can read more about it here, and as you will see in both instances, problems could have been avoided if the pretakeoff checklists had been completed and then nothing adjusted. Now it’s obvious that most of you will be frowning when reading this. You might say, “Well that’s just stupidity,” and you may be right. Let’s just say that one of the missions of this electronic newsletter is to promote flight safety, and here is an example of where we might just save someone’s bacon.

The obvious red flag here is anything that impinges on free movement of the flight controls. But we should also be alert to anything on the checklist that was checked and then changed afterwards, like seat belts, canopy latches, fuel supply. Does anyone else want to confess to a horror story? We all learn from mistakes. One is making changes after checklists are complete.