By Jack Dueck, EAA 337912, Chairman of the EAA Canadian Council

January 12, 2017 - In mid-September the Goderich, Ontario, aviation community honoured three aviation pioneers – Keith Hopkinson, Gus Chisholm, and Jim Armstrong – in the clubhouse at Goderich’s Sky Harbour Airport. The Goderich presentation was actually the second time these pilots were honoured as the awards were originally given in Oshkosh where Fred Buinsma was invited to speak. 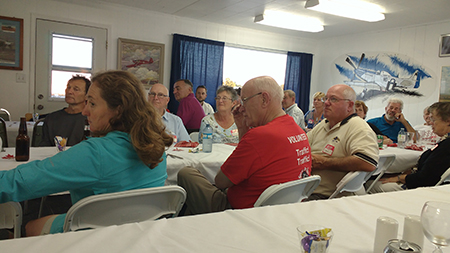 Goderich audience below painting of CF-RAD, a Stits Playboy – the first Canadian homebuilt.

Bruinsma began the evening by telling the group what Hopkinson, Chisholm, and Armstrong had accomplished in the aviation world. In the early ’50s, Sky Harbour Airport was the centre of homebuilding activity outside the United States. Armstrong responded with a speech that included the happenings of that era. Armstrong’s family was there to see him accept his award in person. The evening in Goderich was planned to present the awards to the remaining families and read the speeches given at Oshkosh. 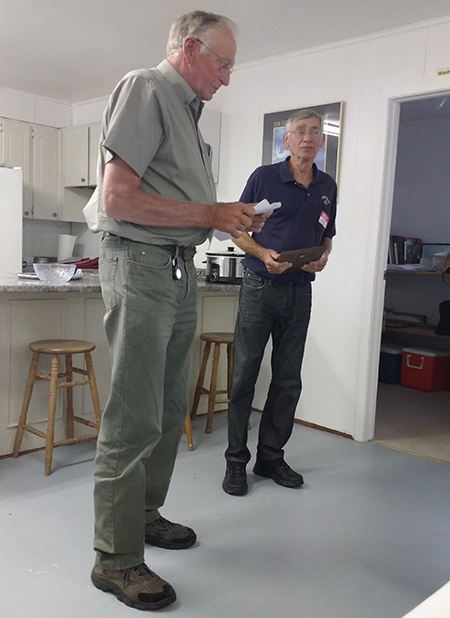 In Goderich, Taylor Lambert read Hopkinson’s accolades saying that it all began 60 years ago when Hoppy started his lifelong dream of building and flying his own aircraft. Mechanix Illustrated published articles about building your own plane, and Hoppy used a set of plans to build a Stits Playboy, which he called L’ll Hokey. It was an 11-month project, and it first flew in October 1955. The Stits (CF-RAD) was the first registered homebuilt to fly in Canada. Today it is in Ottawa’s Canadian Aviation and Space Museum. Taylor presented the award to Isabel (Hopkinson) Sully and family. 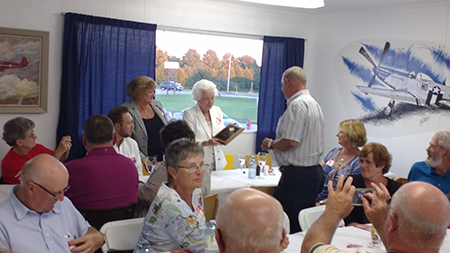 Bruinsma read the acknowledgement about Chisholm who built a Corben Baby Ace that he called Bits and Pieces, after which this newsletter is named. CF-RAC (Chisholm’s initials) first flew in 1958. Chisholm and Hopkinson flew their homebuilt aircraft to the EAA fly-in and convention in Rockford, Illinois. Chisholm held a pilot’s licence for 62 years. Today, the Tiger Boys in Guelph own the Baby Ace, which is still flying. Fred presented Chisholm’s award to airport manager Ken Bogie. 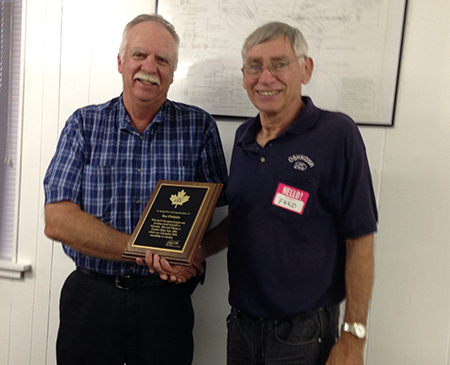 Jim Farrell read the plaque for Armstrong, whose big red school bus is always present in EAA’s Camp Scholler as his family volunteers every year at AirVenture. Armstrong learned to fly at Sky Harbour Air Services at Goderich in 1951. He built a Pietonpol and enjoyed many hours of flying to Mitchell High School and back. The speech Armstrong gave in Oshkosh was read by his daughter Leanne in Goderich.

Jim Armstrong with his wife Leona and daughter Leanne receive a plaque from Fred Bruinsma.

While working for their pilot’s licences, Hopkinson and Chisholm were building their airplanes. They inspired Armstrong to build his first Pietonpol Aircamper, which he could legally fly when completed. His three sons and his daughter now each have an aircraft that Armstrong helped them build. It has been a wonderful hobby for his family. For 21 years, the Armstrongs hosted an annual Pietonpol get-together at their Brussels strip. Armstrong stated that he has probably helped a few more become interested in building their own airplanes. He appreciated receiving this recognition at the same time as Goderich aviators Hopkinson and Chisholm.