Only you can insure something that you own. For example, you cannot insure your “favourite” neighbour’s house, it suffers a mysterious fire, and you receive a claim cheque. Likewise, no one else can insure your aircraft. You can only insure something you own or to which you have a financial/legal obligation. Your car or aircraft lease may require you to carry insurance.

One of the biggest myths in aviation insurance (and one of my pet peeves) is that a repair shop’s policy will cover your aircraft. As per the paragraph above, they cannot insure your aircraft. They may, or may not, have a policy covering them in case they are held responsible for damage to a customer’s aircraft, on the ground or in flight. That is the extent of the coverage they are able to obtain. This would not cover things like fire, wind, theft, etc. (unless they were held responsible).

Many hangar owners do not carry coverage on aircraft in their hangar belonging to others, as this is cost-prohibitive. They may ask you for proof of the coverage you carry. They may ask you to sign a hold-harmless agreement; they may ask you to add them as an additional insured to your policy; but most will not have their own coverage. And if they do, it can only cover them if they are held responsible and nothing else.

The moral of the story is to carry full coverage on your aircraft. This is called All Risks Flight and Ground. If you do not see these words on your insurance policy, you may not have this coverage. I encourage you to contact your broker for clarification.

January 2016 - Do you hangar your aircraft? Do you fully understand the insurance implications if the aircraft is destroyed while it’s in the hangar?

On December 7, 2015, the aviation community in the Timmins area suffered a huge loss. The hangar on Porcupine Lake, which has been a landmark and active seaplane base since the 1930s, burned to the ground. Five aircraft and countless parts and aircraft components were destroyed, along with several boats and equipment belonging to the sea cadets. The hangar was originally owned by McIntyre Mines and then Austin Airways and, most recently, Ratcliff Airways.

The destroyed aircraft included three homebuilts and two Cessnas. Several aircraft had no insurance, as some owners presumed the hangar owner had them covered. It is important that you have your own coverage as well as sufficient liability to cover other property and buildings around you.

What the firemen were facing

This fire stresses the importance of having the same relationship with your insurance broker as your lawyer or banker. You can not buy insurance after the fire or windstorm.

As is often the case, in the photos below, you will see that very little remains of the hangar or the five aircraft that were lost in the blaze. 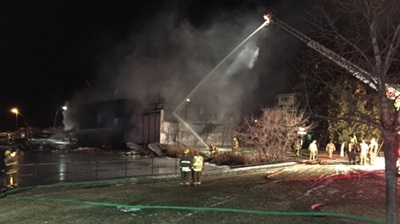 Do you know what would happen if your aircraft were destroyed under these circumstances? How about if it was at a tiedown and was damaged by another aircraft or by the airport’s snow plow? Aircraft not properly secured become missiles in a windstorm, and you may become liable for damage to someone else’s aircraft. 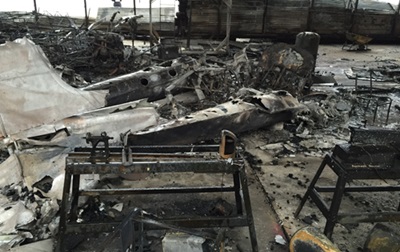