February 2017 - The first time that I sat behind a Kinner engine was in a Ryan PT22. It was one of those great summer days when everything goes just right. There I was in the front seat of an open-cockpit aeroplane while the pilot in the back seat looped and rolled all over the sky. The five cylinders of the Kinner just sort of popped away and blew smoke and bits of oil in my face, but who cared.

Years later in the summer of 2000, it was a different Kinner but the sound was the same, the air smelled great, the view was different through the wings of a biplane, but once again I was having a ball. I was the pilot this time in the front seat of a 1941 Fleet 16B Finch II biplane.

The Royal Canadian Air Force (RCAF) purchased the Finch II in 1940 from Fleet Aircraft of Canada Ltd. in Fort Erie, Ontario. Some 661 were used as elementary trainers at British Commonwealth Air Training Plan (BCATP) facilities across Canada. The Finch was a replacement for the Fleet Fawn and was later replaced, in turn, by the Fairchild Cornell. 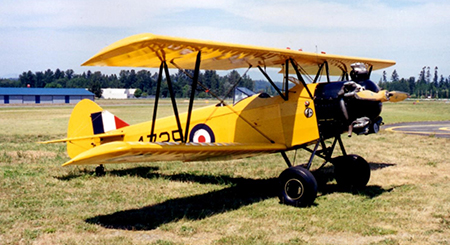 The Fleet 16B Finch II biplane

This particular aircraft, built in 1941, is owned by the Canadian Museum of Flight in Langley. It is painted bright yellow in the style of the BCATP in World War II and carries the number 4725 on the fuselage. It was used by nine elementary flight training schools (EFTS) at St. Catharines, Ontario, and 11 EFTS in Cap-de-la-Madeleine, Quebec. During its service career, this particular aircraft was involved in at least four minor accidents.  The Fleet suffered heavily at the hands of students and instructors alike. According to Spencer Dunmore’s book, Wings for Victory, 48 were destroyed, 92 had to be returned to Fort Erie for major repairs, and there were 648 repairs completed at the bases. Another source, Behind the Glory written by Ted Barris, indicates that a number of losses were due to both students and instructors getting the aircraft into inverted flat spins. An early model was difficult to recover from this manoeuvre and, after some losses were incurred, a redesign of the tail eliminated the problem. After the war, 4725 was sold to Barry Jackson, who operated the Finch in New Mexico and in Mexico. Barry restored it in 1976 and donated it to the museum in 1979.

When preflighting the Fleet, there is a lot more to check than on my Stinson Voyager, not the least of which is one more wing. Being a biplane, there are fittings and wires to look at as well as many other things that the C150 student will never see. The push/pull magneto switch can be checked either inside or outside the aircraft by looking at a large lever on the right side of the fuselage clearly marked on/off. Fuel must be turned on from inside the cockpit when the control lock (seatbelt) is undone. Cushions are required to fill the space formerly occupied by the seat pack parachute. On the outside left is a sign that states whether or not the aeroplane is serviceable. The five-cylinder radial engine is almost completely exposed, making it easy to check for leaks, cracks etc. A screwdriver or Swiss Army knife is needed for access to the back of the engine and the fuel drain. Oil can be checked and topped up, if necessary, from the outside. I like to pull the engine through at least 10 blades to ensure that there is no oil in the lower two cylinders and to check compression. The wooden prop is 8 feet long and tipped in brass. This needs to be checked for cracks and or loose rivets. It does give plenty of leverage but can be a bit of a reach if you are 5-foot-6. 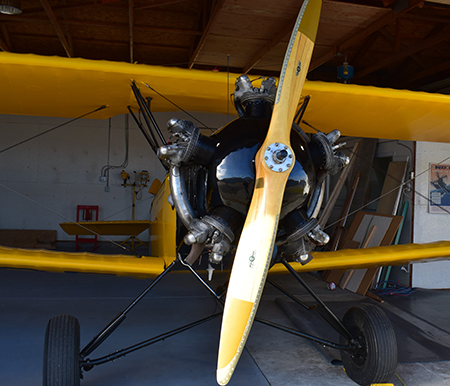 The tail wheel must be locked prior to taxi. This is a good reason for coveralls as I accomplish this by lying on my back at the rear of the aeroplane to position a large greasy bracket and pin that connects the rudder to the tail wheel.

Werner Griesbeck, then museum check pilot, rode back seat for me for the first hour while I tried to get a handle on the old bird’s idiosyncrasies. The first rule of Finch is: taxi slow, very slow. Absolutely no faster than a walk. I have earned the reputation of taxiing too fast, and it was a challenge to slow down. The heel-operated mechanical brakes are very efficient, and a light tap with no one in the back seat will pick up the tail. This is a real attention-getter, keeping in mind both the difficulty and the cost of replacing the propeller.

I learned several things about biplanes just in the course of the first hour or so. I can’t see much out of them. They have a very poor glide ratio. They insist on being landed three-point every time. They demand full attention to the rudder. They are very draughty, and did I mention that they must be taxied very slowly? If you are as sensitive to cold as I am, an insulated flight suit or similar coveralls are mandatory.

The radial engine on the Fleet Finch is a 125-hp Kinner B-5, and it has its work cut out to climb to anything like circuit height. Factory specifications optimistically claimed 1,000 feet in 2.3 minutes.

Takeoff is straightforward, and the aircraft shows no tendency to swing with the application of full power. Acceleration is brisk as the large slow-moving wooden prop takes large bites of air. However, the stick must be held full-back until the speed is high enough to give full-rudder control. At that point the tail can be lifted to a level attitude, and then she will lift off quite readily on her own.

Landings must be made in the three-point attitude with the stick firmly back in your lap again in order to maintain directional control. My initial landings on the grass strip turned out reasonably well, but the move over to the pavement proved trickier. I find that the Finch is very sensitive to any cross wind and that a firm landing helps to maintain directional control. Crosswind landings on pavement should be avoided; grass is preferable at all times. The landing gear has a long stroke and, when airborne, it extends a long way down with a significant camber. On landing, the gear compresses differentially, which results in a dart or swerve in the direction of the compressed leg, whereupon the other one compresses and the aircraft then darts off in the other direction. You have to be “spring-loaded” with the rudder and brakes to prevent things from getting out of hand. Observers have noted that I’m so ready with rudder that I appear to be “sculling” during the flare.

Range is quoted at 320 or 350 miles with 24 gallons of gas at a rate of five to six gph and up to 93 mph cruise, depending upon the source. So far my experience indicates a much higher fuel consumption and somewhat slower speed. This particular aircraft should be on the ground after about two hours and probably something less than 200 miles. Empty weight is 1,222 pounds.

The wings are 28 feet long. The top wing is flat and the lower one has a very pronounced dihedral, making the Finch very stable in level flight. This stability is difficult to disturb, as the ailerons are located on the lower wing only. I don’t know if this is common to the type, but this particular aircraft is very heavy in roll. A bank from 45 degrees left to 45 degrees right is a two-handed process. The stall at 55 mph is gentle and gradual as the wings stall sequentially. The lower wing lets go last with plenty of warning, and recovery is straightforward.

The elevators are very powerful, making it easy to load some g’s. Elevator trim will lighten up the workload.

Early attempts at formation flight felt good as there is enough power to accelerate and enough drag to decelerate to gain or hold position, and it has a significant advantage over the Tiger Moth in this respect. However, the Moth will outclimb the Finch, so some planning is required for the join up.

The aircraft was built as a primary trainer, and as such it was designed for aerobatics. The flying and landing wires are doubled up, as are the tail brace wires, to provide the necessary strength. It was reputed to be “able to do outside loops all day long,” but others claim that it doesn’t have enough aileron for snap-rolls. This aircraft is three years older than I am, so those two manoeuvres are no longer on the agenda for either of us. 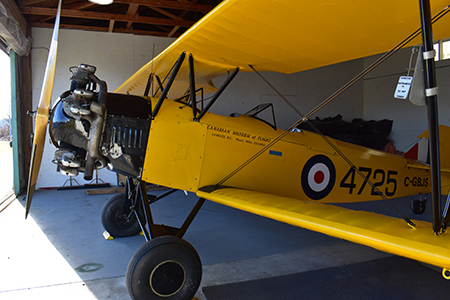 View of those doubled-up flying wires

A short cross-country or a “familiarisation flight” on a sunny day with the sight of those big yellow wings and wires, the regular pop of the five-cylinder Kinner, and the smells of the great outdoors has been one of my greatest flying experiences.